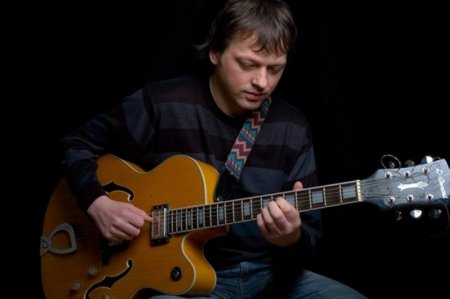 Scottish Jazz & Beyond was exactly what it said on the tin: three exponents of Scotland’s vibrant jazz scene, each bringing something more than just straight ahead jazz, playing gigs together in a week long festival-within-the-Fringe. Fergus McCreadie had to pull out of his show on the programme’s final day, his slot being filled at short notice by a one-off set of improvised music from the Playtime Trio.

I caught the Fergus McCreadie Trio – with bassist David Bowden and drummer Stephen Henderson – at the highly appropriate Pianodrome, a venue consisting entirely of seating made from recycled pianos. Fortunately, a grand piano had been left intact for McCreadie to play an hour long set that featured new music as well tunes familiar from last year’s CD, Turas. McCreadie’s music is rooted in jazz and traditional Scottish music, the two strands woven together seamlessly. The result has an emotional intensity in the slower pieces and an engaging swing in the faster. Whilst McCreadie’s playing understandably makes headlines and wins plaudits, the talent is spread throughout the trio, with Bowden and Henderson making substantial contributions.

The following evening saw three shows fill the studio at the Out of the Blue Drill Hall with contrasting styles, despite all three bands featuring Graeme Stephen‘s guitar and Tom Bancroft’s drums. Their ability to adapt to the demands of the music with commitment and passion reflects their skill.

For Graeme Stephen’s The River they were joined by Chris Stout on violin and Mario Caribe on bass. Stephen uses pedals and loops to create layers of sound, over which he produces complex riffs and solos. Stout is more usually found in a more traditional setting, but his violin playing was full of excitement and energy, which overflowed as he danced around the stage. Bancroft and Caribe were apparently suffering from the seasonal Fringe ‘flu, though their contributions did not seem at all diminished. Many of the tunes the band played followed the course of a river from Flow to The Estuary, as well as pieces from further back in Stephen’s repertoire.

Stephen and Bancroft were joined by Martin Kershaw on soprano and alto saxophones and bass clarinet for a set of improvised music by The Playtime Trio. Improvised music can sometimes be hard to listen to; this trio was anything but difficult, playing inventive melodic music that just flowed. Kershaw moved from one instrument to another, creating a haunting drone with his clarinet, bird-like melodies with his alto and searing screams with his soprano. Stephen did his magic with his guitar and his various boxes, and Bancroft slid from one rhythm to another, pulling and pushing the music back and forth. It felt rather special, watching the trio make something new. They played a single mesmerising piece for fifty minutes, full of fleeting beauty, and whilst that would have been more than sufficient, they then decided to play a shorter improvisation to complete their slot.

Tom Bancroft’s In Common was “beyond” in more ways than one. A collaboration across genres and geographies, Bancroft has crafted songs and tunes with a pop sensibility, a jazz ethic and rhythms and melodies from India. With some Celtic folk thrown in. It probably sounds like it shouldn’t work, but the result is irrepressibly optimistic, catchy music. With much the same line up as the band’s CD Love & Stillness, this is a family affair: the singers are Sophie Bancroft and Gina Rae, the drummer’s sister and wife respectively. They played a significant role right from the start with the fast intersecting tongue-twisted lines of Somehow Something, their voices converging and mixing before going in different directions.

Tom Bancroft’s writing ploughs a very personal field. Love & Stillness is a touching mantra that stems from his trying out meditation; Flower Child 1 and 2 is based on a young flower seller he saw on his first trip to India. As well Bancroft’s drums, the rhythmic propulsion comes from Gyan Singh on tabla, with complex trills, fills and rolls made with just his fingers on the drums. The Indian influence is emphasised by Sharat Chandra Srivastava‘s violin, though he seems equally adept at producing Celtic-folk and jazz. All the elements blend together into a balanced whole – a very enjoyable, upbeat show with which to finish the Scottish Jazz & Beyond showcase.