Bassist Olie Brice has a trio, Somersaults, with saxophonist Tobias Delius and drummer Mark Sanders. They are about to release a second album together on 10 September, and have a launch tour of nine concerts in the UK, starting on 2 October in Glasgow and ending on 18 October in Cambridge. Olie explained more to Sebastian: 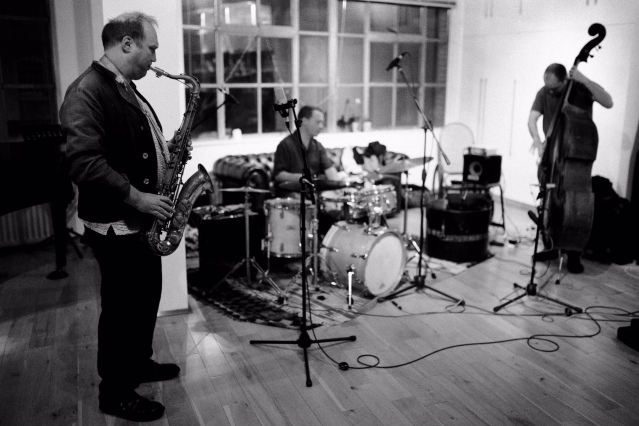 LondonJazz News: How did the trio first form?

Olie Brice: Mark Sanders and I had been playing together a lot, in various groups.  Mark has long been one of my very favourite drummers as a fan and listener, and developing a close playing relationship and friendship with him is a joy.  When touring we had chatted idly about who would be a dream horn player to play in a trio with, and both agreed that Toby Delius would be right at the top of the list. The trio felt like more than the sum of its parts right away, and we were all enthusiastic about keeping it going.

LJN: Tell us about Tobias Delius

OB: Toby is an incredible saxophonist and clarinetist. He’s probably best known as part of the legendary Dutch group ICP (with Han Bennink and Misha Mengleberg), although he’s been part of loads of great stuff, including Louis Moholo’s band Viva le Black that toured South Africa in the immediate aftermath of apartheid. He’s originally from Durham, although you wouldn’t guess it from his accent! He grew up in Germany, spent many years living in Holland and now is based in Berlin. He is a wonderful mix of things as an improviser, deeply rooted in jazz tenor history but also completely flexible and happy to explore the extremes of sound and timbre. He can growl and swing like Ben Webster and Don Byas, roar like Albert Ayler and all kind of other things that are just him. One of the greatest saxophonists in the world, in my view.

LJN: You live in different places: Hastings, Berlin and Birmingham. How/when do you manage to get together?

OB: Not as frequently as I would like, unfortunately. We’re all busy with all kinds of different projects. But we’ve toured the UK once before, in 2013. We’ve also played in London on several other occasions and gigged in Holland. I’m currently working on festival and tour dates for 2020 – any interested promoters please get in touch!

LJN: This is your second album as a trio. Did you feel that some critics writing about it “got” what you do the first time round and what did they say?

OB: The first album was really well received, being described as “European free improv at its best” by the Free Jazz Blog and “a unique and rewarding listen” by the New York City Jazz Review. I was particularly pleased with a review in All About Jazz, which said: “They still maintain their jazz roots in terms of language and roles, but stretch them as far as possible without breaking the mould.” I like that. We all draw on a deep and personal engagement with the history and language of jazz which is present however abstract we get, but also which doesn’t hold us back from that abstraction.

Although the new album isn’t out yet, it has already been reviewed by John Sharpe, and he definitely gets what we’re about. You can read that here.

I’m still very proud of the first album, but this does feel like a progression to me. Mainly I think in that we’ve played together a reasonable amount in the meantime, and found new areas and different ways of interacting, and also of course have all carried on growing individually.

LJN: And you are now a label boss?

OB: Yes! On a trial basis at least. This is the first release on my new label West Hill Records. I’ve had productive relationships with labels including Babel, Two Rivers and No Business, and I’m sure I’ll continue to work with other labels, but I thought it’d be a good time to have a go at dong the whole thing myself. Depending on how this goes there may well be more, and not necessarily only my own projects, but that is all very vague at the moment.

LJN: And you play in the free scene but also in other contexts too…

OB: Yes. I do a lot of different things, by choice as well as necessity. I love playing completely freely, as we do in this trio. That is probably the thing I do the most of and maybe what I’m best known for. But I’m also interested in things that are hard to get to without a certain amount of composition. My Quintet, which features Alex Bonney, George Crowley, Mike Fletcher and Jeff Williams, plays my own compositions which draw on Jewish liturgical music as well as free jazz. The best place to hear that side of my music is our last album, Day After Day (Babel 2017).

I’m also lucky enough to play in several bands led by other musicians who write their own music, and I love being part of realising some very different and exciting visions: Mike Fletcher’s trio, Dee Byrne’s band Entropi, Loz Speyer’s Inner Space and Alex Ward’s Quintet, for example.

LJN: And you have enjoyed continental festivals… any special ones with this trio to single out?

OB: An especially memorable gig was at the Zomerjazzfietstour in Groningen, Holland.  This is a wonderful festival where the venues are dotted around the countryside near the town, and the audience travel around on bikes with detailed maps and schedules. Our gig was in a beautiful little church that really felt like it was in the middle of nowhere – next to a farm, a barn and nothing else as far as the eye could see. With about five minutes to go till we were supposed to start, there was just the three of us and a couple of hens wandering about. Then a cloud appeared on the horizon, like a classic Western film, and bang on time about 150 cyclists showed up. They listened attentively, reacted enthusiastically and then promptly disappeared again!

LJN: What have you called the album and the tracks – and why?

OB: The album is called Numerology of Birdsong. It’s usually a bit of a challenge naming freely improvised music as you haven’t pre-conceived the pieces with an image or inspiration in mind. The album title, which is also the name of the one of the pieces, comes from a recent poem by the brilliant poet Sean Bonney. Other track titles include the old Sussex dialect word for a goldfinch, and a phrase I heard in a tai chi class – things that have grabbed my ear and in some way relate to how I feel about the music.

LJN: Where will the tour take you?

OB: We start in Glasgow, at the Glad Cafe on 2 October. Then via Manchester, Shipley, Oswestry, Birmingham, London and Hastings, and we end up at the wonderful Listen! In Cambridge on 18 October. The London date is at Cafe Oto, on the 16 October. That will be a double bill, with the incredible pianist Alexander Hawkins playing a solo set. Come and hear us!

LINK: Somersaults’ Numerology of Birdsong is released on West Hill Records on 10 September.