The lengthy single set began with the heavy percussive phrase that defines the melody line of the title track of the album, and from there to the dying fall of classic top-end Count Basie piano licks at the end of the evening’s solitary standard, the rarely heard Oh! Look At Me Now, we had been treated to a feast of writing and playing whose roots are deep in jazz’s real golden age. 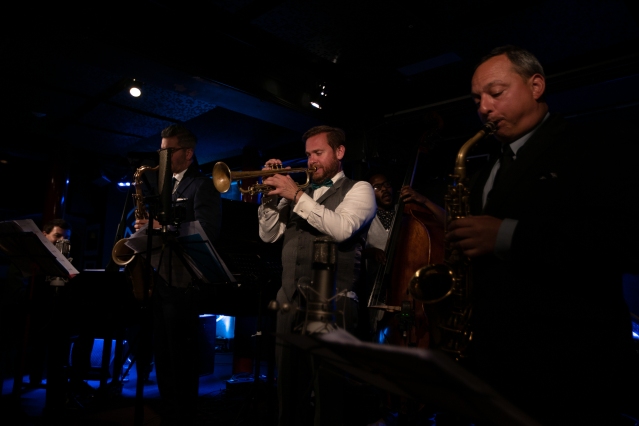 Hard bop doesn’t really cover what the band does – the writing is so much more interesting than the usual Blue Note blowing session. Nevertheless, there was a lot of Blakey Messengers inspiration in the rhythm section, especially Jones’s bottom-ended sound and multi-rhythmic patterns.

Collins’ magnificently burnished trumpet sound and conception are right out of the school of Freddie Hubbard and Lee Morgan, but in a lovely slower composition, Collins’s Look Ahead, when he switched to the mellower flugelhorn, I was reminded of the Evans/Mulligan charts on the tracks that later became the Birth of the Cool album. Here was the same skill in creating voicings that suggested more than just three horns to create a much bigger sound.

Indeed, by the time we got to The Hill, a composition by Tom Harrison, an important figure in this project, as writer of half of the material for the band, I found myself scribbling in response to the crisp lively sounds of the chart, the name Johnny Dankworth – yes that’s how he was known in those days – another brilliant writer who was also stimulated by the bright sounds of those same classic Birth of the Cool compositions. The Hill was a feature for pianist Dan Nimmer, who holds down the piano chair in Wynton Marsalis’ Jazz at Lincoln Center Orchestra, and his whole approach embraced so many facets of piano jazz with even a strong hint of those rhythmic displacements and chord voicings of Erroll Garner. In brief, with a rich mixture of backing riffs and harmonic carpets under solos, Collins and Harrison brought so much more to the table than the usual formulaic ‘head-solos-head’ of the hardbop revival.

The Sextet with an English rhythm section with the truly great Winston Clifford will be in the South West from 21 September and then nationally. If you cannot track them down, chase up Road Warrior on the enterprising Ubuntu label; it is bound to be on a lot of ‘best-of’ lists come December.