When artists perform at Punkt, they have to agree to be sampled, and then to have their contents immediately regurgitated via a live remix set, where a team of quick-witted interpreters improvise an alternative experience. This is a process that lurks at the very core of this Norwegian weekender in the small town of Kristiansand, on the south-coast of Norway. Sometimes, the remixers grasp discernible elements, but at others they bend the sonic matter into a radically altered existence. A remix always begins less than five minutes after a set has finished, and often starts up almost instantly. The remixers are shadowy figures, to the side of the stage, or secreted in a dim booth to the rear, capturing stray digital matter whilst a set unspools. All musical zones are welcomed, according to the tastes of founders and chief samplists Jan Bang and Erik Honoré, but however broad the range, the artists mostly worm their way into being a genre-elusive cabal of like-minded explorers.

This 15th edition of Punkt placed its typically diverse musical acts into several new venues: an art gallery, a cathedral and a concert hall. This year, the stylistic spread seemed even wider than usual, with sets from Thurston Moore, Dai Fujikura, Steve Tibbetts and Supersilent.

The next piece, Folklore, was co-written by Størlokken and Helge Sten (two-thirds of Supersilent), for the all-female Trondheim Voices. Pulsing waves spread through the v-shaped formation of nine singers, washes staggered in waves as they thickened the heady liquids, overtones shimmering. Small bells were chimed, and some of the singers made joik-like whoops, in the Sámi folk style. Bell activity increased, and measured clapping intensified, leading to a gong climax. The Voices inhabited a terrain beyond ‘classical’ or ‘choral’, melding primeval voice traditions in a fashion most often heard in the works of Meredith Monk.

The beginning of the duo set with Steve Tibbetts and Marc Anderson was curious, as their soundcheck smeared gradually into their actual set, without much warning. Such unpredictability could be beneficial, but when the body of the performance began to display signs of introverted attention to noodling, it was clear that Tibbetts didn’t have much interest in audience communication, or indeed crafting his structures in any kind of edited way, for public consumption. Later, Tibbetts seemed to realise where he was, and began to engage the crowd with some friendly spinning of anecdotes. His 12-string guitar was filtered through laptop and sparing pedals, but this increased the density of his constructions, which became a mess of crowded patterns, as percussionist Anderson followed him by paddling around his floor-kit, which included mbira, tabla and steel pan.

Unusually, the remix by Bang, Honoré, guitarist Eivind Aarset and trumpeter Arve Henriksen elected to span all three of the preceding sets in a single session. It ended up being the best music of this early evening sequence, with Henriksen adding his own vocals to the palette, working with the snatched Trondheimer essence, and the stately organ mass, singling out a lead female voice amidst the heavy frost mass, vaulting together into the ether. There were no readily audible excerpts from the Tibbetts/Anderson set. 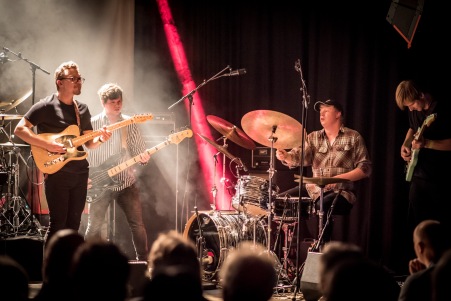 An hour later, the Friday night ended up in the regular Kick club, which was a suitable environment for the more rocking music to follow. Drongo are a local Kristiansand outfit, unknown to most folks, who appreciate accumulating repetition, their combination of three keyboards (Fender Rhodes, Prophet, Korg), two guitars, bass and drums sounding closest to Robert Fripp’s old band, The League Of Gentlemen. Together, they often behaved like a huge single instrument, guitars sounding like keyboards, and keyboards sounding like guitars. Sledgehammer rhythms led into a sharp cut to an a capella sea shanty episode, then the riffing resumed, with a shuffle-drumming thrust. Simen Løvgren’s remix began with some severe low bass drum stutter, guitar splices whipped into a repeat cycle. Some of Løvgren’s volume swoops were too sudden and clumsy, as he frequently brought up cherished sonics from out of the clattery morass. Surprisingly, when your scribe observed the mixing desk decibel-counter from his raised side-perch, Løvgren only reached 92db, whilst Drongo were up at around 100. It must have been his frequency depths and highs, as Løvgren actually sounded significantly louder. One vocal slice-up sounded like A Love Supreme, as the mix jackknifed through multiple contrasting sections. Messy, yes, when compared to the slick sculpting of Bang and Honoré, but still filled with a makeshift excitement.