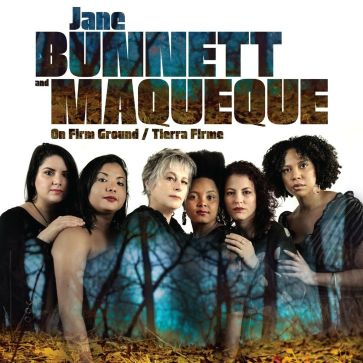 Five years ago, award-winning Canadian saxophonist, flautist and bandleader Jane Bunnett embarked on a new project. Bunnett, who made her first life-changing visit to Cuba in 1982, has travelled between Toronto and Havana regularly ever since. She has made Afro-Cuban Jazz her specialism and played and recorded with many Cuban musicians over the years. Unlike citizens of the USA, Canadians, and pretty much the rest of us were free to travel to Cuba. On a visit in the early 90s, my February flight on an old Russian plane from London to Havana stopped to refuel at Gander, Newfoundland and, surreally, our party of Hawaiian-shirted and straw-hatted travellers walked between towering snowbanks to get to the terminal. I pondered then on the links between Cuba and Canada, and indeed heard many Canadian accents on that trip.

Bunnett’s Cuba project started out as a community exercise – to encourage and record young women jazz players and composers. Here is an extract from an interview of 2018 in Toronto’s The Globe and Mail:

The idea has always been clear to Ms. Bunnett: to help the women rise above the high level of competition that exists within Cuba’s music scenes and conservatories and the machismo that can stand in their way.

“I kept meeting women, when I was at a jam session or at a jazz festival down there, and I would always see these young women that I knew from the conservatories just sitting on the side, watching their boyfriends or their husbands perform. There was no encouragement for them.”

She has even felt this stigma herself with fellow seasoned musicians. “Even a couple of times when I got up to play, I would have some guy, right in the middle when I was soloing, just start soloing [himself], regardless of the fact that I was playing.”

Bunnett met a couple of promising young Cuban women musicians at a jazz festival there, through them auditioned many others on video, and eventually formed a simpatico all-female collective which she called Maqueque, which means “the energy of a young girl’s spirit” in an old Afro Cuban dialect.

They set to work. The plan was, according to an interview in the Ottawa Citizen :

to tour widely around the globe while inviting special female guests from each city to perform with us. The idea is to present headlining artists but emerging artists as well, so we can help nurture their careers along the way too.

It has been a great success.

Over the last few years the band have toured the Americas extensively from Yukon to Rio, including the jazz festivals at Newport and Monterey, and made two European tours, to critical acclaim. This is no longer a mentoring exercise – Down Beat magazine voted Jane Bunnett and Maqueque as one of the Top Ten Jazz Groups in its most recent Critic’s Poll, stating: “This band of young, killer female musicians…. all play and sing like seasoned veterans”.

To hear the band play on On Firm Ground /Tierra Firme, their third CD, you would not guess that they started as a social project. The personnel have changed since the first incarnation of the band, but several former members contribute to this record. There are other special guests too, including a singer/steel guitarist from Toledo Ohio, Nikki D Brown. All the members of the band contribute a composition, with several by Bunnett herself, and another by founder member Daymé Arocena. She is a very fine vocalist (think young Celia Cruz) who was just 18 when the project started, who has gone on to pursue her own career and is now signed to Gilles Peterson’s Brownswood label. Young pianist Dánae Olano, composed three of the numbers and collaborates closely with Bunnett in the composing and arranging. She is a Havana Conservatoire graduate like Arocena, equally as comfortable with Chopin as with Chucho Valdes. Her bewitching playing permeates the whole album, with the aid of a wonderful (poly)rhythm section – Tailin Marrero on basses, (sounding positively Charlie Haden-esque on Habana de Noche,) the energetic drummer Yissy Garcia, another founder member, propelling the music along, and inventive Mary Paz on percussion. There are very fine vocals from almost everyone in the band and all the special guests. There is lots of close harmony singing and improvised vocalisations. A new member of the band is singer Joanna Majoko who is from Zimbabwe but apparently “immediately connected with the Maqueque groove”. The sleeve notes are vague, so I don’t know who wrote what, nor who is singing on which tracks, which is a tad frustrating.

The CD has a mixture of Afro Cuban and fusion influences. There is classic Afro Cuban son, bright and accessible, like the sprightly opener La Linea filled with polyrhythms – timeless Cuban music that Benny Moré would have appreciated. There are elegant rumbas Habana de Noche (Havana at Night) and Broken Heart which almost tips over into Sadé territory with the soulful vocals of Nikki D. Brown, who also plays sacred steel guitar. Other tracks like Sky High and The Occurance with their lush chorales, and soaring flute solos from Bunnett, put me in mind of Pat Metheny’s Latin jazz fusion work in the early 80s with Brazilian percussionist and vocalist extraordinaire Nana Vasconcelos. Frustrated at not being able to see the band, I watched some live footage online – the band appear to be having the times of their lives.

Maqueque are currently on a massive world tour which this time is taking them as far south as Argentina. Sadly, we have missed the European section which was last Spring. Let’s hope they’ll be back, and that next time they make it to the UK.