One influential figure in British jazz recently told me a story. As he was walking past a restaurant in Hitchin, he started listening, and his ears were presenting him with a curious puzzle. Had the restaurant possibly shipped in two pianos, or hired two pianists? 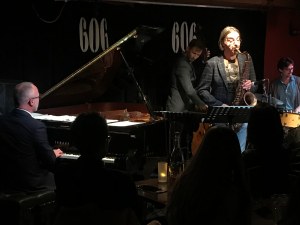 My friend went inside, to discover there was in fact just one player, Perugia-born and Hitchin-based pianist Marco Marconi. And, yes, one instrument. This story illustrates that particular capacity Marconi has – which, say, Alex Wilson or Geoffrey Keezer also share – to be doing so many rhythmically independent things, the listener inevitably starts to think there has to be more than one person or two hands playing. And Thursday night’s album launch for New Roads (33 Records), the first time I have heard him live, did indeed show that side of Marconi’s playing, most obviously on the Afro-Cuban inspired tune Mandala. This very satisfying gig revealed many other aspects of him too.

This was also the opportunity to hear a saxophonist whom other players talk about with the same hushed and reverent awe that is reserved for players like Jerry Bergonzi or Nigel Hitchcock. On the evidence of last night, the Italian tenor player Max Ionata really is a titan. For a flavour of what he can do at full tilt, watch him burn up George Coleman’s Apache Dance with three Danes in a pub. At the 606 he also showed his seemingly effortless Joshua Redman-like control of altissimo, plus capacity to play ballads with wonderful grace and affection, and a presence in the sound when playing subtone, particularly at the low end of the compass of the tenor, that may well be unique.

The opportunity to hear the stylistic range of these two Italians was one of the main joys of this 606 gig. And to hear how them react and respond to each other also felt very worthwhile. As improvisers Ionata and Marconi share a lot. Perhaps the capacity to be lyrical and cherish a melody is innate to Italian musicians who grew up to the sounds of the cantautori and the great film composers in their ears, and these two did not disappoint in that department. Furthermore, Marconi and Ionata as improvisers both love building solos using tiny melodic cells as patterns, and there was also a fascination in hearing them doing that constructivist thing in a similar way. They showed a palpable mutual understanding and respect for each other as they did so, and that empathy plus perhaps the sense of occasion was allowing some real magic to happen.

This magic was there above all in the ballad Amar Pelos Dois by Salvador Sobral, a song which was Portugal’s Eurovision entry in 2017. (In fact I’m racking my brain, this may be the first Eurovision song I’ve ever heard as a jazz instrumental?). The quartet gave each other space for the gentle story of the song to unfold, it became a series of the gentlest of hints of a continuing line. This was a moment of repose that one wants to hold on to.

The quality of the bassist and drummer in this quartet, the same pair as on the album cannot go unnoticed either. These are experienced players with a proper sense of both dramaturgy and balance. Drummer Emiliano Caroselli, originally from Rome, spent three years in his youth studying in Cuba, and has been in London since 2012. What is remarkable about him is not just the speed with which he picks up the suggestions of rhythmic patterns and lays them down in the ensemble, but also how self-contained and complete he is as soloist. He settles in so quickly and in such a full-sounding and polyrhythmic and yet structured way, it is as if we are eavesdropping on a Jack DeJohnette solo recital. The quality, the positivity of bassist Tom Farmer, the only non-Italian in this band are well known. He had a feature moment playing cello-like arco in Marconi’s tune Nostalgia. It was also great to hear Steve Rubie on flute in a paradoxically upbeat, happy and life-affirming take on Jobim’s Triste.

When everything goes so right, one starts to think that surely there must be something to quibble about. What was missing? Anything I say here may be quite wrong because I was unable to stay the to very end. Yes, it is quite possible that all inhibitions were lifted as they often are for the final number and, yes, I will have missed that…But from the part of the gig I that I did hear, I found myself having the reflection that all four members of this quartet are wonderful constructors, incredibly able craftspeople…and that maybe what I was missing was something of the rebellious and the mischievous. I dreamt that the late John Taylor might walk in and deliver the line which I am told he used to slip into lessons: “Now make a mistake”.

But such reservations should really be put aside. When jazz works as well as this in a small space and in front of a willing audience, there is nothing quite like it, and no place one would rather be. As 606 club manager James remarked elegantly and encouragingly at the interval, the whole audience really had been drawn in completely, and been quiet, attentive and supportive throughout. And that concentration in the room was inevitably feeding through into what happened on stage. A great night.