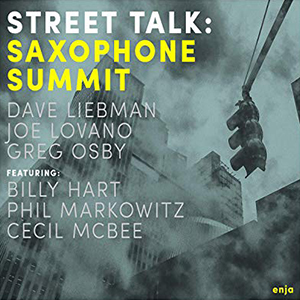 When the joy and thrill of music-making gushes out of your speakers with a life force such as this, you know you’re onto a good thing.

Saxophone Summit is not simply the meeting of renowned reedsmen Dave Liebman, Joe Lovano and Greg Osby, but a fervent sextet completed by the similarly luminous names of drummer Billy Hart, pianist Phil Markowitz and double bassist Cecil McBee. Three previous releases – Gathering Spirits (2004), Seraphic Light (2008) and Visitation (2014), originally founded on the influential vitality of John Coltrane – saw the late Michael Brecker, then Ravi Coltrane, share the horn-trio front line with Liebman on soprano and the tenor of Lovano. This time, on Street Talk, an album of essentially six compelling, full-bodied works by the performers, it’s altoist Osby who revels in the camaraderie and excitement of it all, confirming to me that it was “as much of a pleasure to create as it is to listen to”. And with a palpable sense of ‘conversation’, it magically delivers fine, new treasures on each outing.

Lovano’s Street Talk (from his 1990 Blue Note debut release, Landmark) chirps emphatically with snappy, close-knit riffs which enclose lively solo excursions and dialogue from the saxophonists. This rhythm section, a constant through the Summit’s twenty years, is equally as prominent in the mix, Markowitz’s piano jabbing ferociously while Hart’s cymbals thrash across the pleasing, mobile resonance of McBee’s bass. It shrieks, it toys, and is an absolute gem with vigorous in-the-moment invention reminiscent of Wayne Shorter’s Footprints Live. Markowitz’s Point emphasises the band’s structural precision as Liebman’s soprano hurtles above its push-pull yet purposeful momentum, a touch of mystery added by Lovano’s rich, ruminative tenor. Heralded by Liebman’s lithe, swooning soprano, Loudly – his loose contrafact over Oscar Hammerstein II’s Softly as in a Morning Sunrise (which Coltrane also recorded) – bursts into life; a superb, vivacious swinger offering assured saxophonic delights, with Markowitz, McBee and Hart at full tilt.

Tightly-meshed saxes colour McBee’s brightly picturesque A Portrait, later providing space for his particularly elegant bass solo – and throughout the album, it’s these tiniest details which entice. For example, after an animated and free alto-and-piano exchange, the persistent, ominous pulse of Osby’s Carousel is announced by the most splendid splash cymbal strike – and it matters! Here, the three saxophonists interweave closely, loosely and, above all, intuitively. And at almost nine minutes, the finale of Billy Hart’s Toli‘s Dance (arranged by Liebman) rises from his beautifully varied percussive soloing into the most sumptuous exotic gyrations from the band.

With its amazing poise and balance (no sensation of sax overload), I just cannot recommend Street Talk highly enough – attention-grabbing on so many levels and an instant, irresistible repeat-player.