Landing quite late on the second official day of Salzburg’s Jazz & the City, I practically ran from my hotel into town to try and delve straight into the music. I learnt my first lesson about the festival pretty quickly. Arriving 10 minutes after the start of one of the festival’s ‘blind dates’ – a particularly inspired idea where two musicians from the festival randomly play a gig together – not only could I not get in but there were already around 30 people milling around the entrance waiting to step in as people left. 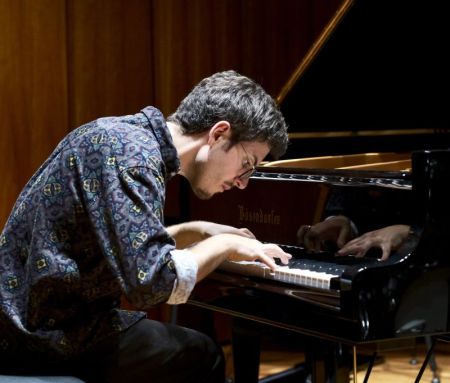 I decided therefore to cut my losses and head straight to the gig I really wanted to see an hour later. Leeds-based, nine-man outfit Nubiyan Twist who, while I’ve been listening to and loving for a while now, have never actually managed to see live. It’s funny how often it happens that you end up catching UK-based groups somewhere entirely different.

I needn’t have rushed though – they were playing Szene Salzburg, which it turns out is one of the biggest venues so I arrived 45 minutes early to an almost empty auditorium. There’s clearly a learning curve to this festival but that somehow makes it all the more exciting.

Because any of its little foibles come from the fact that this is the kind of dream festival where for four days and nights jazz, electronic and world music take over the city. From guitar shops to wine cellars to various sized concert venues to simply walking the city streets, music can be found everywhere. Then there are film screenings, art installations, literature readings, and pop-up stages. And every single thing is entirely free! Hence, perhaps, the need to arrive to everything early.

Another great thing is that most musicians seem to stick around for most of the festival and tend to play more than once, often in different set ups. So where I missed Almut Kühne at the Blaue Gans hotel last night, I would go on to see her at the Schloss Mirabell the next day (review further down).

Nubiyan Twist ended up being the perfect way to kick off the festival for me anyway. Born in Leeds, where they all met at music college, this nine-piece group blend together a variety of world music inspirations, adding in their own variety of virtuosic playing, composing and audio producing skills. The resulting sound they have deemed ‘future jazz, afro-dub’, and they cited greats such as Fela Kuti and Mulatu Astatke as influences on the night, but this only goes someway to describing it. One thing it certainly is is full of energy and infectious groove. They’re a happy bunch of guys, who you can tell are genuinely enjoying each moment playing together and being on stage and this always transmits to an audience.

They’re also incredibly talented, moving between instruments, taking turns on lead vocals and experimenting with different sounds and vibes. When sax player Nick Richards took the mic centre stage, the mood shifted to one slightly reminiscent of other popular new-jazz/electronic artists such as Jordan Rakei or Alfa Mist. Then when Pilo Adami moved from behind the congas to pick up the guitar and sing, there was a shift back to more afrobeat influences.

They were also joined on stage by Ruby Wood from Submotion Orchestra to play some of her own music, which switched things up a little yet again. This ever-evolving sound is part of the excitement of having such a large number of musicians together on stage and for now they seem to be wearing their multiple hats well. 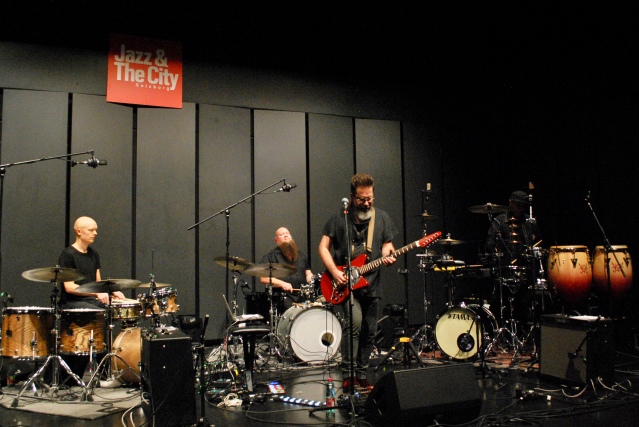 Salzburg woke up on Friday 18th to a day that was almost surreally sunny and warm; it felt as if I’d flown from the London rain the previous night and landed in Austria in August. The perfect conditions therefore to try out one of the festival’s alternative events and go on a walking silent disco tour of the city. Guitarist Jarmo Saari led the way, with an ever-increasing trail of people behind him, all donning headphones and enjoying his improvised playing and vocalising as we wandered through the city in the sun. When he paused over the bridge to play something “inspired by the flowing of the river” there was one of those moments of absolute music pleasure where you know you’re experiencing something that won’t be repeated in the exact same way again.

As the tour ended by Mirabell gardens, it seemed only practical to head into the magnificence of the Mirabell Palace’s marble hall to hear Berlin-based experimental vocalist and pianist Almut Kühne (who I’d failed to see in her ‘blind date’ the night before). It seemed I was in for another challenge though as already, 30 minutes before the performance began, there were lots of people waiting around the entrance. And when the doors did finally open, I momentarily feared for my life as the octogenarian crowd sprung to life with a fervour I hadn’t imagined possible. The last time I’d been crushed that hard for the sake of music was at a a Justice concert at Barcelona’s Sonar festival.

As we made our way up the grand staircase towards the hall two cellists began to play and a contemporary dancer wound her way up among the audience. It took me a minute to realise that the performance had begun. As we all halted on the stairs, Almut’s distinct vocals could be heard before she was even seen. They were guttural, animalistic and disconcerting. The dancer began to tell us a tale… at least I think she did, it was relatively hard to hear at a distance. But eventually, we all made our way into the hall, audience and performers as one. The hall is simply breathtaking, its intricate, gilded walls and large light-transporting windows evoking the Mozartian heritage for which the city is known. It seemed somewhat jarring to see it packed with people lining the walls and instruments being pushed to their ear-haltering limits.

It might not have been easy to listen to, it might have been a little confusing at times, and gathering by the number of people who left before the end despite having waited so long to get in, it might have been a bit too much to take, but Almut Kühne’s 30-minute continuous performance was quite spectacular in its own way. Visceral and impossible to not give your undivided attention to, it took us on a journey. A literal one through the building and around the four corners of the marble hall, and a more internalised one as the musical and storytelling punctuations came to some kind of resolution in the final five minutes and Almut allowed her vocals to morph into more recognisable singing. The kind of pure, angelic, soul-piercing singing that would most certainly not have seemed out of place in Mozart’s Salzburg. 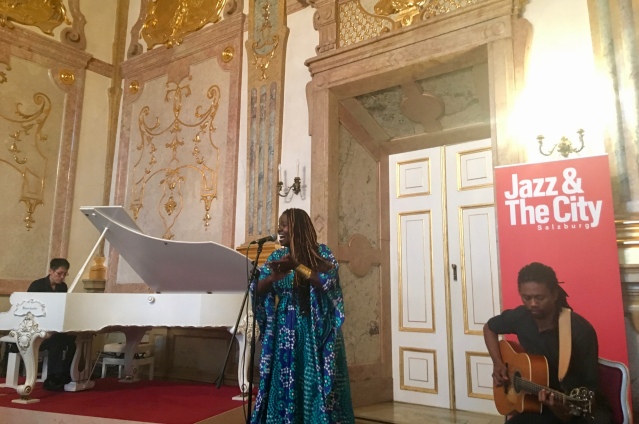 Next up in the same venue was Somi. There were striking similarities between these two artists: their ability to fully captivate using the full extent of their vocal capabilities and an unapologetic abandon that allows them to move, dance and use the body in a way that transports the vocals and performance to a different level. However, Somi’s set-up and performance was certainly the more accessible one. Performing in a more traditional jazz trio, Somi’s songs are innovative and thought-provoking (ranging from African politics to the effects of gentrification on immigrant communities), yet the sophisticated melodies and African grooves allow an audience to fully engage with the musical elements.

Her voice was really quite incredible at close range. There were moments where she would step entirely back from the microphone to let loose a bit and it became clear that most of the time she’s only using about 10% of her full vocal power. It made me wonder what would would happen if it was fully unleashed. There’s a good chance we would all melt in our seats. So while undoubtedly her sound would fill the largest of halls – and she was in fact going to play again later that night in the large hall at The Mozarteum Foundation – I’m glad I got the chance to see her in this more intimate setting. Another excellent benefit of Jazz & the City’s innovative programming.

I kicked off the evening’s listening by heading to the Mozarteum University, the central point of the city’s unrivalled music education scene, to hear my walking tour guide of earlier in the day perform with his group Jarmo Saari Republic. This is another nice thing about the festival: you end up going to see people you weren’t necessarily planning on. Based off the back of the walking tour, I changed my original plan to go and see Theo Croker back at Szene Salzburg for something I felt might be a bit more offbeat. A bit more ‘festival now or never’. And I’m glad I did…

Playing “somewhat improvised versions” of music from the group’s album Soldiers of Light, Jarmo explained how forming this group back in 2012 was a dream realised for him as he’d always loved the drums. Perhaps a bit greedy to surround himself with not one, not two, but three drummers? Not in his opinion, and not in mine either. There was an excellent interplay and dialogue between all the musicians and it was clear how much the drummers enjoyed playing with one another. Again another group whose enthusiasm and unbridled enjoyment was infectious.

I’d actually spoken to one of them, Olavi Louhivuori, on the walking tour and he’d described their live performances as “a lot of music coming at you”. I wasn’t sure exactly what he meant until they began to play and, as the three drummers and Jarmo’s layers of guitar, spoken word and theremin began to mount, the phrase ‘wall of sound’ immediately found me. When they were playing to their full extent, it really was like an all-consuming wall of sound that reverberates through your whole body and wipes your mind clean of anything else. It was exhilarating. It should be its own form of therapy.

From there I crossed the university foyer to a different room to see the homegrown Elliott Galvin Trio. What a contrast it was. It’s quite difficult in some ways to move from an intense music experience to something so different and to adjust your mind and body quickly. Coming from such high-octane energy, it felt as though this trio’s sound and demeanour on stage were somewhat reserved and I felt the Brit in me sigh a little. Their playing though is intricate and interesting, and after a little adjustment I found myself fully invested in the complexity of the sounds and textures they were creating in such a seemingly effortless manner.

After around 10 minutes it became clear they weren’t going to pause between songs or address the audience at all, the reason for which was only revealed at the end. They were playing the entire A side of their most recent release Modern Times in one “big, continuous arc of music”. They had recorded the album in a similar way as they had challenged themselves to record straight to vinyl and wanted to share that experience with the audience. They then went on to do the same with the B side. It was definitely an interesting concept and one that allowed you to fully move with the musical developments of the album as a whole without interruption. But I felt slightly exhausted by the end and there were some really magical moments in there that it would have been nice to have the chance and time to reflect on a little before it was swept away by a new musical idea.