At a ceremony today an English Heritage blue plaque in honour of Ronnie Scott was unveiled. The plaque marks the site of the first Ronnie Scott’s club, ahead of the 60th anniversary of it’s opening. Ronnie Scott together with fellow saxophonist Pete King, opened his eponymous Soho jazz club in the basement of 39 Gerrard Street on 30 October 1959. 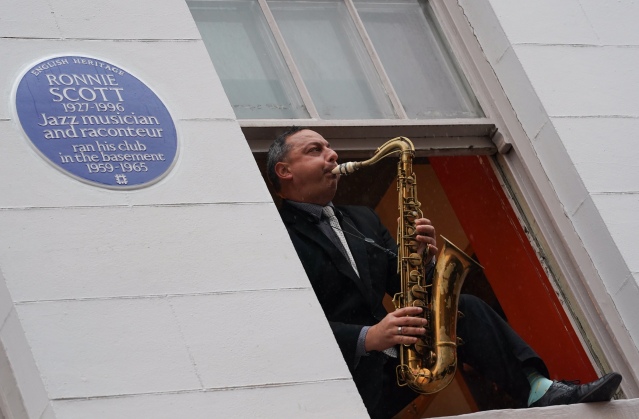 That story is included in my regular London Column in the German magazine JAZZTHETIK this month, consisting of this salute to Ronnie’s at 60 (Link below). Here is the column:

Happy 60th birthday to our temple of jazz in London, Ronnie Scotts’s Club. The premises which opened in the “old place” in Gerrard Street in Soho on 30 October 1959 were tiny, but the anniversary is being celebrated on the grand scale at the Royal Albert Hall – 5272 tickets for the birthday concert sold out in a matter of one hour. There will be other events to mark the happy occasion too. A “blue plaque” is being placed by English Heritage on the original site in Gerrard Street, and Ronnie’s widow Mary is flying from New York to unveil it.

Ronnie’s is a place of stories, of memories, of personal associations I started going there back in the 1980’s. I remember Ronnie himself (né Schatt) leaning on a pillar delivering his dead-pan jokes. Or there was Stan Getz one night in a foul temper spending more time skulking in the darkness of the bar rather than playing on the bandstand. I remember witnessing the emotion in the voices of artists on the occasion of making their club debuts, from Michel Legrand in 2011 to Nils Landgren, whose first appearance was in fact as recent as early 2019. And I remember with great pride being asked to play on the main stage – only once but I treasure it! – by trumpeter Digby Fairweather to join his band and to take a solo on Pennies from Heaven. The key was F; one never forgets these things.

Shielded from the rain, Mary Scott unveils an English Heritage Blue Plaque dedicated to the memory of her late partner Ronnie Scott just days before the 60th anniversary of the world-famous Ronnie Scott’s Jazz Club (Photo supplied by PINPEP)

One good friend of mine was lawyer to Ronnie, and he has a wealth of stories, such as the time Ella Fitzgerald insisted she had to have her own toilet in her dressing room. They knocked a wall down. Then there are musicians who have made life-changing connections there. Stevie Winwood’s saxophonist Paul Booth was spotted by Airto Moreira as a teenager and has never looked back. Berlin-raised Natalie Williams and her “Soul Family” always bring a special warmth to the club and the association has served her well.

The club is almost always sold out, but nevertheless looks actively at how it can “future-proof” itself. Mainly through smart programmer Nick Lewis it has forged strong connections into the younger London scene and looks at ways developing the younger audience. One young bandleader has claimed in recent interviews that he personally won a battle to have seats and tables removed to make a dance floor. Not true. The club does this deliberately and on a regular basis. Here’s to the next 60 years.