There is no dramatic start or ear-catching launch; instead, Darcy James Argue is slowly layering the instruments in his Secret Society, growing it, shaping it, and moving it around. The 18 musicians on stage could be an unwieldy unit, but instead they are malleable and receptive. It is quite a thing to see.

Concert opener Flux in a Box is a re-imagining of a fictional documentary history of tennis plucked from the most reader-unfriendly end note of David Foster Wallace’s most reader-unfriendly book, but is certainly not listener-unfriendly. It is an exhilarating thing – laced with an intricate, range-stretching solo from Alexa Tarantino on alto saxophone, and built on a sound constructed of many moving partsre-configuring in unexpected combinations. 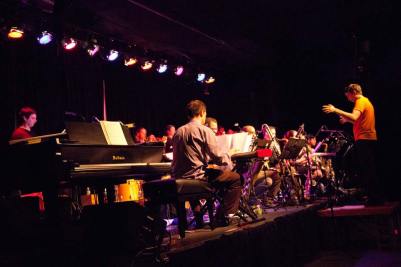 Winged Beast was a bold embrace of the mismatched, bolted together parts of this live band. It swung from sumptuous unified moves finished with aplomb to moments where the group pull in different ways – bouncing to different beats and switching time signatures, with an excellent extended solo from Ryan Keberle.

The Secret Society is a big big band, with a selection of instruments that are not always utilised, but sitting ready and waiting. On their 2016 record Real Enemies this variability in size is exciting, surprising (songs like You are Here, or The Enemy Within), but at the Jazz Standard at times it almost feels like a wasted resource – musicians visibly there, patiently waiting to be called into action. The potential musical energy is high, and it’s a relief when it’s released and realised.

Part of that visible potential is just in the numbers – 18 is a lot of people on a stage – but part of it is in the type of music being played. Real Enemies is a coherent musical essay, still jumping genres delightfully but centered on a conspiratorial mood – a sinister, febrile cinematic sound tied together with a thread of political reportage audio commentary snippets. At Jazz Standard the Secret Society set instead moved across their last decade of compositions, each song with a different theme and narrative, and accompanied by an aural essay from Argue expounding at length on his literary, musical or artistic points of reference for the piece to explain the context.

The close the set with a more familiar-sounding piece Last waltz for Levon, oozing with a composed and slow brass band majesty. And while the rich horns take much of the attention throughout the show, the success of the Secret Society is definitely built on the rhythm section; There was excellent improvisation throughout from Nate Radley on guitar, Adam Birnbaum on piano and Ricky Rodriguez on double and electric bass, but it was Jon Wikan on drums who stole the show, cajoling and moving the band through the diverse set beautifully, and through that act practically leading the ensemble nearly as much as Argue.