Ian Shaw (Side By Side Refugees Charity Night at the 606 Club, 1 December)

Ian Shaw will be hosting and compèring a charity night at the 606 Club in Chelsea on Sunday 1 December in aid of Side By Side Refugees. Laura Thorne asked him to explain more about it:

LondonJazz News: Tell us about this charity gig…

Ian Shaw:  We’re honoured and very touched that the 606 team have kindly agreed to host our Xmas raiser again. The last one was superb and lots of funds went to, well, what we continue to do, which is to support small NGOs on the ground, in some of the most compromising human conditions, in Northern France. 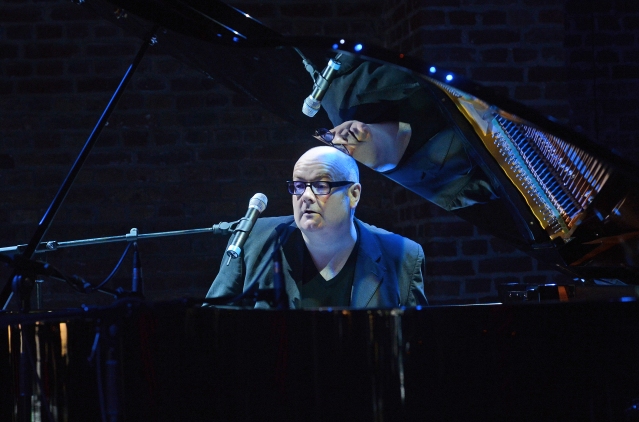 LJN: For those who aren’t familiar with Side By Side Refugees, can you describe what they do and how you became involved?

IS: Side By Side was formed in September, 2015. I was already volunteering at the unofficial refugee camp in Calais, known as The Jungle, initially taking out clothes, musical instruments and dried food. I had a call from Katrina Kieffer-Wells, to help a convoy of collected aid, from hubs all over Essex and the South East. Self-distribution of aid in a refugee camp is hard. Thankfully there are groups who don’t well (Care4Calais, Help Refugees, L’Auberge Des Migrants. It was a difficult, rainy day, but I saw quickly how pro-active and organised these amazing souls were. So I joined their team, as a trustee. This enabled my ‘public’ voice to gain the extra gravitas, as I then became SBS’s spokesperson on many of the TV and radio media outlets, where I was already joining an important narrative, recognising this, as a ‘political crisis’ – not the ‘refugee crisis’ favoured by the media. Often enabling many other volunteers, NGOs and local UK groups, to join an ever-expanding team. It still is. More so. SBS became a registered charity, nominated for The European Diversity Award, of which we are all very proud. Liz Morgan is the rock and absolute core of the charity. Julie Bassett too. I’m the one who Kat says ‘we can sling him out there to get a bit gobby, when gobby is required…Or sing… Both is fine.’

LJN: The guests you’ve invited for t.he show include Barb Jungr, Georgia Mancio and Kate Williams, Doon MacKichan, Trish Clowes and Bumi Thomas… can you explain what led you to approach them..

IS: When I’m compiling a line-up for SBS shows, I’m very aware of the ongoing support of an expanding community of artists, writers and performers. Georgia Mancio and Kate Williams have not only been actively promoting Safe Passage (an initiative that advocates the rights to safe legal routes for unaccompanied minor refugees with UK connections) and Phone Credit For Refugees, but their critically acclaimed recent project, ‘Finding Home’ has reflected this, artistically. Art is a vital conduit to educate and inspire. Saxophonist and composer Trish Clowes is a patron of Donate4Refugees, a charity we partner with. Bumi Thomas, the Glaswegian-born, Nigerian artist, has been threatened with deportation, through a fragmented and challenging Home Office. We campaigned successfully to stall her case, enabling a full judicial scrutiny to be effected in court. Her artistry reflects displacement on a very personal level.

Barb Jungr I have known since the comedy/stand-up/cabaret scene of the eighties. Her support for SBS is phenomenal. The actress and comedian Doon Mackichan said ‘yes’ in a heartbeat. These responses are heartening, and proof of our ever-expanding ‘family’.

Steve Rubie has to be one of the most generous and cherished musicians and jazz club owners on the world scene. I’m thrilled he’s agreed, not only to hosting our show, but also to play.

LJN: Is there a particular musical theme for the night – we couldn’t help notice that the invite says ‘A Side by Side Sleighride’!

IS: There will be a few Xmas ditties I hope. Even if there’s a pagan, humanist whiff. I do love the twinkly lights. And obviously a vegetarian mince pie always slides down a treat.

LJN: It was Joni Mitchell’s birthday on 7 November. I think it’s fair to say she’s one of your favourite songwriters. What is it in particular about Joni’s music that speaks to you so personally?

IS: I’m a huge Joni fan, like most musicians I know. It would take a cold heart to not, at some point, recognise all human frailty, error and honesty, in her astounding words and music. And she wrote the most beautiful Xmas song ever!

LJN: You’re a singer, pianist, showman. Where does the confidence, the performer gene, come from?

IS: I’ve always cherished honesty in performance. I grew up in a Welsh brass band and choir community. You couldn’t hide in there. My dad used to cry when he heard beautiful music. We were not as close as both of us would’ve liked, but music and performance was our glue as father and son. He put me in all the pubs and clubs as a young teenager. I played pop songs on a Crumar Roadrunner keyboard that we were paying on the slate…I loved it, it was hard, but so rewarding to see his proud beaming face at the bar. I owe him everything. His kindness was famous in our town.

Performing is about the audience. You can change somebody’s life with the right music, play, poem, dance, painting. I like this. I also love the adventure of playing with musicians whose sensibilities are carved in jazz. It’s always fun.

LJN: There are so many important causes prevailing upon people’s attention right now… how do you stay focused and hopeful in the face of this? What inspires you?

IS: The displacement of fellow humans – whether it’s local homelessness, political division, climate-driven, geo-politically rooted civil war, the ever-important breaking up of inequality within our schools and workplaces – or the simple basic desire for a better life, has never looked so fearfully unattainable, and people around us fall through terrible cracks. We are these people too. There should be no “they”…just “us”
I hope, with SBS, this (very straightforward) sense of empathy to our fellow world citizens, can only be a good thing. It just needs noticing a little more.

Laura Thorne is Marketing Manager at the 606 Club

LINK: Side by Side Charity Night Details and Bookings

Side by Side Donate Page

Tagged as: 606 Club, Ian Shaw, Laura Thorne, Side By Side Refugees