The SEED Ensemble delivered a triumphant conclusion to Sunday’s festival programme in the pristine concert hall of the new Storey’s Field Centre. Building from an atmospheric small group intro of piano, guitar, bass and drums, the arrival on stage of the horn section, led by composer and director Cassie Kinoshi, signalled bigger and more dramatic things to come. A pleasing bonus was that throughout the 90-minute single set, artist in residence Gina Southgate was committing it all to canvas, stage right, to striking effect.

The 10-strong SEED Ensemble was born out of Cassie Kinoshi’s realisation, from the outset, in 2016, that “you could write big band music and have a huge harmonic sound without needing 20 plus people”. She has spoken of the way in which the Caribbean and West African elements in her own upbringing have been absolutely formative in the music of 2019 album Driftglass, which formed the basis of this concert. It is avowedly a celebration of black British culture, but interestingly, with a debt to the sci-fi stories of Samuel L. Delaney, as she revealed tonight, to which the CD title is a reference. Neptune, played early on in the set, with its dense harmonies and complex time signature set the tone decisively and enjoyably, with the two trumpeters Miguel Gorodi and Sheila Maurice-Grey each taking distinctive and rapid fire solos. The title is the name of a forebear of the composer’s family, sold into slavery at the age of eight.

This is music full of drama and variety in terms of instrumentation, dynamics, harmony and rhythm. Mirrors for example began with solo guitar introduction, then bringing in tenor sax followed by the whole ensemble. Shirley Tetteh’s guitar solo was masterful and meditative, with a beautiful bubbly tone and an abundance of ideas, but a striking stillness at the same time. Chelsea Carmichael’s tenor solo was similarly commanding, with a succession of riveting melodic variations. Solos here never seem like gratuitous blowing, but purposeful and intrinsic to the whole. Afronaut was tonight without its usual spoken word feature, but made up for it with some exciting interplay and trading of ideas between alto and tenor saxes, leading into a sinuous piano solo, over bass and drums only, the other band members looking on appreciatively. 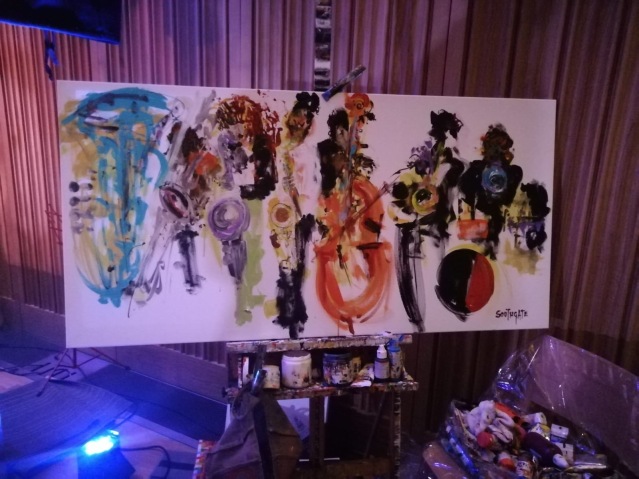 The Darkies began with Rio Kai’s very distinctive bass solo, entirely on harmonics to begin with, leading into some rich ensemble playing, with the huge sound that this band is capable of, and dissonances that can be quite thrilling. Chris Barrett (standing in for Theon Cross) contributed a rumbling tuba solo with a sprinkling of high register guitar embellishments, making for another fresh soundscape. Wake was different again, beginning dramatically with a militant marching chant by the whole band, based on a Langston Hughes poem and creating a powerful sense of expectation. The piece is a response and dedication to Grenfell. Johnny Bristow’s trombone solo, with interweaving and complementary guitar lines, was powerful. The composer’s soaring and searing alto solo was a fitting high point.

Penultimate tune Come home nicely demonstrated the range and versatility of this ensemble, beginning with a calm and alluring alto melody, before shifting gear into a more dark and discordant whole group workout, with blistering trumpet solo. This crescendo itself morphed into a quiet and spacy piano solo over bowed bass and snare drum figures. The final tune was a lively African sounding dance groove, another direction again, with a pleasingly spiky and syncopated trombone solo. As the audience response left in no doubt, this was a rousing conclusion to hugely enjoyable evening.