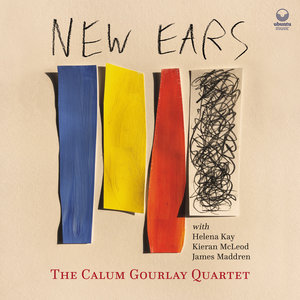 Composer, band leader and double bass virtuoso Calum Gourlay reinforces his place as one of the UK’s leading young musicians with this quartet outing of original material – craftily arranged and beautifully performed.

Originally hailing from Glasgow, Calum Gourlay has for some years been a mainstay of the Scottish National Jazz Orchestra and the Tommy Smith Quartet. More recently Gourlay has been London-based and making an impact with his quartet Thelonious (performing the music of Monk, naturally) and his monthly big band residency at the Vortex. This new quartet, once again in a ‘chordless’ format like Thelonious, was started this year to focus on Gourlay’s own compositions and has been performing around the UK this autumn.

The thinking behind big band arranging is clearly audible on this CD, even though the band has only four members. In opting for a tenor saxophone/trombone line-up, Gourlay is following in an important yet often unrecognised tradition – the brass instrument is more strictly named the ‘tenor trombone’ and sounds at much the same pitch as the tenor sax, which makes for mellifluous harmonies and juicy counterpoints. Indeed, Sonny Rollins has paired his tenor with the trombones of JJ Johnson and latterly Clifton Anderson, to great effect.

Gourlay has picked the line-up from his contemporaries, and so we get not one but four relatively fresh voices to enjoy. Helena Kay brings a smooth tone and carefully judged tonality to her tenor saxophone performances here, while Kieron McLeod can inject a harder edge to mix with some nifty trombone slide work. Drummer James Maddren brings his customary vast dynamic range to the proceedings, always busy and never rushed, making a great contribution.

The seven tracks are all Gourlay originals, and show good judgement from the composer/arranger in terms of resource deployment with considerable care given to arrangements not just in the head sections but through the tunes as they are developed. The opening Be Minor starts with a rolling pulse and we immediately get a taste of Gourlay’s delicious bass tone. The strong melody interweaves thematic statements with faster passages, leading into a twin-horn extended acapella solo which both projects the soloists and allows the listener to appreciate the rhythm players as they rejoin. Gourlay takes his own solo, a beautifully worked passage backed by Maddren’s shimmering percussion.

Blue Fugates is one of the most satisfying tracks on the album. Gourlay has described this as being like a blues-gone-wrong, and it achieved that aim with room to spare – each individual harmonic shift sounds utterly bluesy, yet it’s all well away from the classic 12-bar format. Once again the horns surprise us with written passages in the middle of the piece, picking up the momentum and giving a platform for another ringing dinging bass solo. Trinity gives a wealth of harmony work to the horns along an extended chord sequence, with Kay showing her double-density playing before McLeod duets with Maddren to good effect.

I have a sense that in years to come we may be looking back on this CD as an important step in the career of all four of these musicians. For now, enjoy the sounds and talents as they develop before our eyes and ears.