There is, quite literally, no other musical experience like a concert by Hermeto Pascoal. In his review of the great Brazilian’s 80th birthday concert at the Barbican in 2016 (link below), John L Walters described two aspects and gives a flavour: “He is a prolific composer for a multitude of ensemble sizes and his tunes and hooks quickly tunnel their way into your brain. He makes music from anything he can get his hands on, singing, grabbing wind and percussion instruments and squeaky toys.” That sense of having witnessed the joyous music flowing from him effortlessly is an idea one wants to keep close to the front of one’s mind. 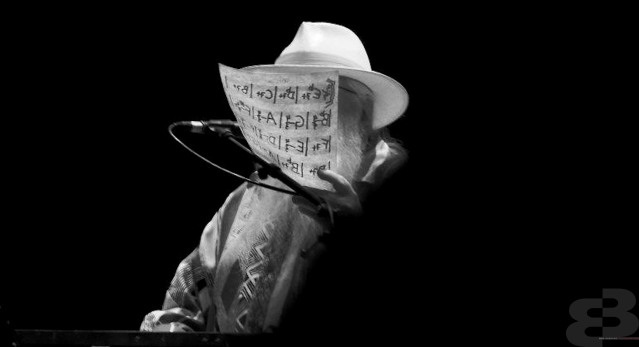 The Brazilian, now 83, is also a radiant musical lodestar, particularly here in the UK. For the generation of musicians around Loose Tubes in particular he was and still is not just an important but an irresistible and irreplaceable influence. That potent light has been carried on and spread widely in the herculean work of important and influential educators such as Stuart Hall and Chris Batchelor at Middlesex.

This year for the EFG London Jazz Festival, Pascoal and his remarkable band of five devotees and disciples performed two nights at Ronnie Scott’s and I attended the first. The band consists of musicians utterly devoted to his music, and with a complete understanding of it. Pianist André Marques, percussionist son Fábio Pascoal, drummer Ajurinã Zwarg, bassist Itiberê Zwarg  and Jota P (João Paulo Ramos Barbosa) on saxophones and flute. Each one is a phenomenal instrumentalist in his own right. And the common ethos and familiarity and loyalty, and a family feel that bind them are also a joy to watch. A Portuguese friend kindly translated the homilies that Pascoal kept giving them through the course of the evening. They are the folk, he was saying, who got him through life’s ups and downs, and every time one of the band passed him, he would show that gratitude with a fist-bump or a friendly touch.

And what the band do is phenomenal. They internalize every twist and turn of Pascoal’s joyful and often fiendish tunes. He keeps writing – a tune every day he says – and the band are there to get them out into the world. His son Fábio was the main bearer of odd percussion sounds, leaving Hermeto free to direct and solo and scrunch on the DX7.

There are episodes that stay in the mind, such as when Pascoal lurched from food to foot irregularly, making the band deliver forceful and loud crossbeat accents in a way that seemed reminiscent of some kind of physical theatre. And there was an episode where they introduced and played a new tune that Hermeto had written… that day on a napkin. But above all it is the collective joy and musicality, the sense of being in the presence of a unique creative fountainhead who has changed music for ever, and left his happy mark on future generations of musicians.

The support Daniel Bennett Trio were a severe disappointment. I would far rather fill my head –  and this review – with memories of having heard the great Dick Oatts give a totally illuminating masterclass at Guildhall in the afternoon. He explained and demonstrated the way he left space for the trio in standards, and showed his versatility by soloing on Indiana in a chronological sequence of about nine different jazz styles. Total mastery.

LINK: Hermeto Pascoal at the Barbican in 2016.