Last Saturday evening’s Jazz Generation concert promised a perplexing juxtaposition of disparate elements yet delivered a palpable triumph to a packed hall. The programme was an uplifting combination of old and new music that placed jazz composition confidently within the formal setting of a traditional orchestral performance. 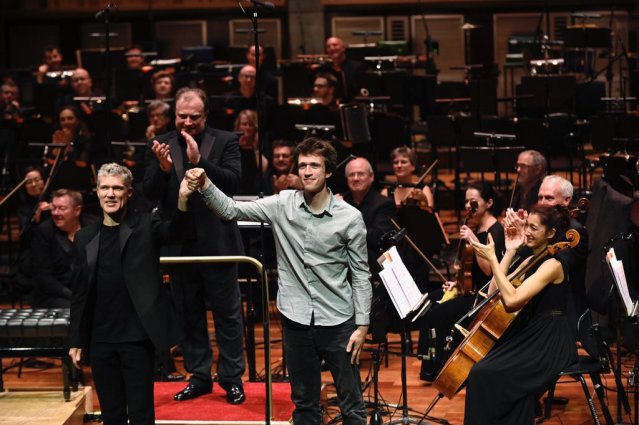 After Urban Runway, Bramwell Tovey’s swaggering, nine-minute opener, the BBCCO settled into Evolving Spring, the keenly anticipated cello concerto written for cellist Matthew Barley by 28-year-old jazz bassist Misha Mullov-Abbado. After a brief blast of orchestral bombast, Mullov-Abbado made the most of Barley’s singing cello tone with a full-blooded tune. The entire four-movement concerto was packed with melodies, deploying a sense of space and timbre that may owe as much to Gil Evans as to any 19th-century master. And yet Evolving Spring was undeniably a largely through-composed, meaty concerto, with a wide orchestral palette and well defined parts that the BBCCO’s players clearly relished. Barley’s improvised cadenzas flowed seamlessly from themes written for him by Mullov-Abbado. The two men’s close relationship (Barley is the young composer’s stepfather) gave the performance an electrifying sense of tension and release, and the time never dragged. You could imagine Mullov-Abbado soundtracking a contemporary conspiracy thriller, yet he is never afraid to wear his heart on his sleeve, whether with a romantic cello theme over a loping riff from the entire double bass section, or an asymmetric and busy folk-like tune for most of the ensemble.

It will be interesting to see how much this piece gets performed: Mullov-Abbado’s achievement is to have composed a credible orchestral work that’s infused with jazz, yet can be played by a classical orchestra without fuss. In the future, you could imagine the concerto fronted either by a more ‘straight’ soloist, or by an out-and-out jazz cellist. For the moment, Evolving Spring is very much Barley’s, and it deserves to be heard worldwide.

The second half was devoted to music from the repertoire of Duke Ellington, performed by the Nu Civilisation Orchestra with Tomorrow’s Warriors’ StringTing augmented by players from the BBCCO. The result was a thrilling, if occasionally unwieldy, combination of big band and orchestra, driven along with authentic swing and precision by the great Rod Youngs on drums.

We were treated to eight pieces from Ellington’s dance suite The River, a rarely heard work commissioned by the American Ballet Theater. Radio 3’s Andrew McGregor explained in one of his erudite introductions that as research for this work, Ellington immersed himself in recordings and scores of musical works that sought to express the movement of water: Handel’s Water Music, Debussy’s La Mer and Britten’s Peter Grimes.

Ellington is justifiably regarded as one of the great 20th-century composers as well as a jazz composer of towering importance. His repertoire presents many challenges for both big bands and orchestras, since his methods of composition were so closely associated with his idiosyncratic rehearsal methods, his inimitable piano style and the sound and style of long-serving band members such as Harry Carney and Johnny Hodges.

In The River, the absence of a sax section meant that other sections had to take the lead with Ellington’s catchy, tricky melodies, and the young players did a magnificent job of making the strings swing.

The highlight of the second half was Chelsea Bridge, the famous 1940s tone poem written by Ellington’s long-serving associate Billy Strayhorn (1915-67), in a version arranged and conducted by Peter Edwards. This sublime performance featured the superb, Cuban-born violinist Omar Puente as soloist.

The finale, Ellington’s New World A-Coming, scored for a big hybrid orchestra, was a tough challenge for the ensemble and Edwards, this time as piano soloist, but its high points – a gorgeous trombone choir, sweeping, swinging strings, and its underlying message of hope – made it a powerful choice.

As we walked out of the hall, we were greeted by a high-energy blast of sound from Misha Mullov-Abbado’s sextet, a highly accomplished band that tore headlong into a handful of the bassist’s nicely structured compositions for a post-concert jazz session in the foyer. Most of the audience stayed on for this extra helping – a refreshing, generous and eloquent end to an evening of magnificent music.

LINK: Jazz Generation was presented by Andrew MacGregor and recorded for In Concert, BBC Radio 3, to be broadcast at 7.30pm on Friday 29 November 2019.