This concert celebrated Evan Parker’s 75th birthday of last April and his long association with the Huddersfield Contemporary Music Festival. For the occasion Evan had assembled an 11-piece ensemble with three horn players, a pianist, a double bass player, two percussionists, one on laptop and turntable, one on electronics, and two players on sampling keyboards. The names are listed at the end of this review. 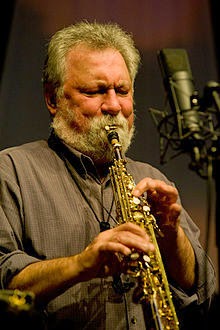 It is quite difficult to describe the music and to pick out key moments as it was essentially one glorious ongoing maelstrom of sound. It contrasted with some of the minimalist music heard elsewhere in the festival and one is tempted to describe the mix of electronics, percussion and the sound of the horns and piano as maximalist music. It was certainly full of variety, dramatic and uncompromising. My neighbour described the experience as similar in a positive way to walking through a jungle at night with a huge variety of sounds coming from all sides.

It began with percussion from Paul Lytton gently manipulated through his electronics; gradually the sound built up with the various keyboards and the second percussionist entering the mix. The latter, Mark Nauseef, created some particularly fascinating sounds mixing percussion with electronics. Then Sten Sandell entered with a number of punctuating sounds from the piano. Finally, the horns entered, first Peter Evans on piccolo trumpet, then Evan on soprano saxophone. It was interesting to hear Evan say in the pre-concert interview with Festival Director, Graham McKenzie, that he believes he has a different character on the soprano from that he has on the tenor saxophone; certainly his sound and lines on the soprano seem to fit this music that lies between free jazz/improvised music and contemporary classical music particularly well.

The music continued moving between the passages with the horns and those dominated by the electronics and percussion. Peter Evans was brilliant throughout on the piccolo trumpet and the normal trumpet. There were interesting short solos from Sten Sandell at various points, one from bass player Adam Linson, and an exciting interaction between Peter Evans and Sam Pluta mixing and throwing back Peter’s sounds. It was all improvised, but there was clearly structure involved. The piece lasted 80 minutes.

In the pre-concert talk Evan talked of his interest in creating ‘futuristic music’. Certainly this concert revealed an approach to music that lies in the interesting and mysterious middle ground between improvised music and contemporary classical music.