A Sunday afternoon at the movies, as Led Bib premiered their latest project – providing the soundtrack to a film by Dylan Pecora. The filmmaker cut the film to recorded music by the band, who on this occasion extended and improvised their music with Oli Chilton manipulating the film to keep everything together.

The film was a series of surreal and increasingly disturbing images, beyond the scope of this reviewer. It wasn’t clear whether the images specifically related to the music or not. 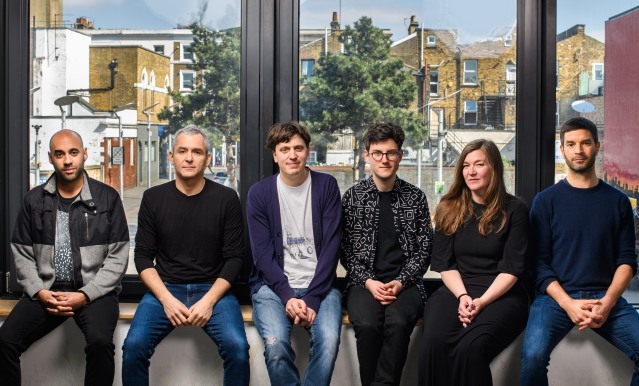 Featuring new member Elliott Galvin on keyboards and electronics, with vocalist Sharron Fortnam, the band had a greater variety of tone than on other times I’ve seen them. When the band were playing at full tilt – which was often – Fortnam’s words were lost, although her voice added depth and texture to the full on sound.

In some ways, Led Bib were darker than previously; in others, like the addition of vocals, lighter. The contrasts were evident as the band moved from one piece to another.

The darkness came in the heaviness of some bits of the music. There were several passages where Liran Donin, playing electric bass, was hammering out bass chords, whilst drummer Mark Holub laid down a heavy four-to-the-bar beat. With saxophonists Chris Williams (alto) and Pete Grogan (tenor) simultaneously playing powerful improvised lines, the effect could be awe inspiring, but also oppressive.

Led Bib are a formidable live act; the double sax-attack combined with Donin and Holub’s forceful posting can lead to positively ecstatic crescendos. But the overall effect of the visuals, voices and music – not least the use of synthesised and sequenced noise – brought to mind experimental prog acts from the early 1970s.