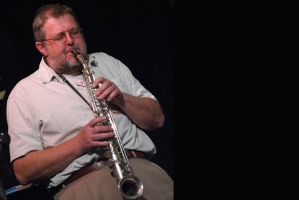 Thursday 9 January sees the launch of the Paul Dunmall Invitation Series in the Eastside Jazz Club at the Royal Birmingham Conservatoire.

Promoter Tony Dudley-Evans explained: “The idea and project is a collaboration between TDE Promotions and the Jazz Dept at Birmingham Conservatoire to celebrate the music of Paul Dunmall. It will involve a monthly session on the first Thursday of the month during term time, thus January, February, March, May, but not April. Each month Paul will invite different guests.

“The first one is this Thursday and the guests that Paul has invited are John O’Gallagher, Percy Pursglove, Chris Mapp and Miles Levin (Steve Tromans was originally on the list but won’t be appearing).

As always at the Eastside Jazz Club Club, the music begins at 6.30pm with a set from a student band; Paul and his guests will play from 7.45pm.