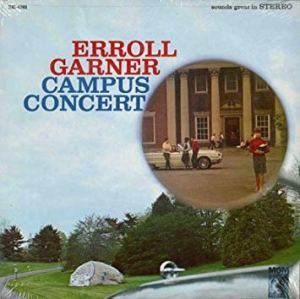 The elf-like Erroll Garner was engulfed by myth: couldn’t read music; in 1947, was the first piano player to work with Charlie Parker freshly out of Camarillo State Hospital; during concert performances, he perched on the Manhattan telephone directory and became so drenched with sweat that he had to change wardrobe from the skin outwards for the second set; his live album, Concert By The Sea, was an all-time jazz chart-topper; his composition Misty was covered by nearly every major jazz singer, achieving immortality as part of a movie title; he only played concert halls; he lived in a Carnegie Hall apartment; his trademark lagging left hand and voicings struck a chord with nearly every working jazz pianist including Oscar Peterson in Canada, Andre Persiany in France, and Dudley Moore in Britain.

A lot of myth, maybe. But every word was true.

Garner was a genuine one-off musical genius. As Dudley Moore (a whiz at the ivories himself) once observed in a sleeve note: “his persona is streaked in bold and subtle flashes across his music, a unique singing voice. To achieve all this on a piano is no mean feat, but it’s not the technical aspect of his playing that astonishes but the fact that the technical aspect evaporates in a spectacular contact made through a music entirely Garner’s own. Pure passion: a sprinkling of the demonic, a yearning for the tender, and a straight line to joy.”

‘Straight line to joy’ isn’t hype. To hear Garner live was to experience a rush of drama, romance, sly humour and, above all, submission to his infectious swing. Every Garner concert was a work-out for the toes.

Not only did he make comprehensive use of all 88 keys, but he also explored all the effects and dynamics the piano has to offer. A master of tension and release, he phrased like a mighty big band, with thundering Basie-type riffs, before emerging with a devastating flurry of single notes that took immediate flight. He could enchant with wispy impressionistic treatments of ballads (often his own compositions) which suddenly morphed into ecstatic stop-time choruses, often accompanied with a saucy wink. Few musicians took more pleasure from live performance.

If the above descriptions have whetted your appetite, Campus Concert, the last concert album released during his lifetime (well, Campus Concert-ish. Seven of the tracks were recorded at Purdue University and the remaining two at a recital in Seattle, all during 1962) promises to provide satisfaction. The rock-steady Eddie Calhoun on bass and drummer Kelly Martin provide solid and reliable support throughout.

All the renowned Garner mannerisms are on show here. On Indiana, he strikes a stirring intro before pitching into headlong melodic statement, finally alternating fat brass section-type chords with helter-skelter breakaway runs. Star Dust (note: never ‘Stardust’. The title was split from the very beginning.), receives the full Rachmaninoff, treatment: lashings of romantic TLC filigree against rumbling bass figures. Performed at the height of the ’60s mambo craze, Mambo Erroll adds delighted flurries of excitement to the modish rhythm. And from its intro, a reharmonization of the theme, Lulu’s Back In Town is a non-stop tour-de-force.

It becomes clear that Garner is a machine for creating fresh variations. Without resort to clichés, every performance gathers added rhythmic zest from his miraculous left hand, a micro-beat behind. He does it at speed on Almost Like Being In Love and at a more stately pace on the elaborately-embroidered version of My Funny Valentine (containing an object lesson in sultry swinging at slow tempo). These Foolish Things is preceded by one of Garner’s extended meandering intros that worried the hell out of bassist Eddie Calhoun on stage who never knew what tune, key or tempo the maestro had chosen, yet managed to offer full propulsion the moment the song was launched. Once Garner hits stride, he demonstrates his ability to hold an audience’s attention, even with a measured, medium-slow tempo. And, while it’s possible that he takes Cole Porter’s ballad In The Still Of The Night at a more jaunty pace than the composer would have intended, it’s still worth the ride. The set closes with Garner’s own La Petite Mambo (the height of the mambo craze, remember?), previously unreleased.

If you don’t have any Garner, you’ll need this album to plug a gap in your collection. And if you’re a Garner completist, you’d still need it because you don’t have this version of La Petite Mambo. A straight line to joy indeed.