Singer and songwriter Rachel Sutton says her new album A Million Conversations is about the “…rich tapestry of life… Lovers meet and they part. The rejected drink and forget. And loved ones are lost forever”. She will be launching it at the 606 Club in Chelsea on Wednesday 5 February, and spoke to Laura Thorne (*) in advance of the show.

Laura Thorne:  You are launching a new album A Million Conversations at the 606 Club Chelsea on Wednesday 5 February. What was the inspiration for the project, and why now?

Rachel Sutton: I’ve been wanting to do this album for a long time. The last few years have seen some major changes in my life and some of the songs I’ve written are very personal to me. The track A Million Conversations, is especially so. When my Mother died in 2016, that song poured out of me. It is the title of the album and fittingly so. My songwriting has become a passion and through the creative period leading to this CD, I have fully immersed myself in the songwriting process and reached new levels of self-expression. I’ve chosen songs that reflect the changes I’ve experienced, as well as the tumultuous comings and goings of life which we all see – some I’ve witnessed and some I’ve imagined. The two covers I’ve chosen, strikingly different from one another, speak to me for different reasons and I think they work well with the ‘feel’ of the record.

LT: Five out of the seven tracks on the new album were written by you and your other half, pianist Roland Perrin. How does that songwriting partnership work, what is the specific nature of the process?

RS: Sometimes melodies and lyrics come quickly or I can be walking around for days or weeks with a verse in my head but have no bridge.  I’ll sit at the piano and pick out as much as possible and experiment that way.  Then I will go to Roland and ask him to help me with the chords and putting the whole thing together.  I can hear it all in my head.  Roland is absolutely fantastic at going through the chords laboriously until I shout ‘that one! That’s it!’ I’m glad he’s so patient!  He might make suggestions, we might argue, he’ll say ‘you can’t do that’, I’ll say ‘yes I can’ and we’ll laugh about it. But they are always my chord choices in the end ha ha!  Roland is an incredible musician and an amazing composer too – I have learnt so much from him and I’m very grateful – I couldn’t have done this album without him.

LT: Tell us more about the songs themselves, you’ve described them as ‘life stories’… 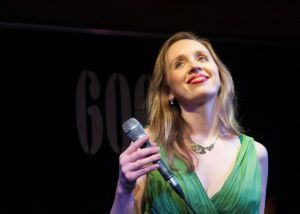 RS: When Love Was New tells the tale of a life-long relationship and the hope that it ends with love and a promise to remember all that was shared. Pick Myself Up throws us into the world of a woman on the up from her no good ex-lover as she parties herself towards happiness. As mentioned, A Million Conversations, explores the loneliness of grief, yet the knowledge that your mother is always with you. In Kiss My Baby Goodbye, an older woman’s affair with a younger man is ending and it hurts more for her than it does for him. From the era of The Great Depression comes Gorney and Harburg’s Brother, Can You Spare a Dime, the downhearted and downtrodden come alive in this song, having once built the city they love, they now have nowhere to go. Bouncing back with Evil Gal Blues (Feather & Hampton) this song about an independent woman is a bold and driving blues to make the feet move. An abandoned child looks for her mother in The Space but cannot find her… this song of adoption and longing is the last journey on the album.

LT: You attended the Royal Welsh College of Music and Drama and, in addition to your career as a singer, have acted in a number of stage productions. How does your acting inform your singing and your choice of material?

RS: A song tells a story.  For me, it’s absolutely vital to tell that story with feeling and purpose.  Technique is important but it means nothing without inhabiting the song.  As an actor you pull on your own life experiences or those of others and you imagine, you empathise and you create something that is as near to reality as possible.  A great song and a great lyric needs to be expressed so that it touches the audience.  When choosing material, I will always go for what makes me want to dance, what grooves, or what moves me and then I’ll think about how to perform it as both an actor and a singer in a way that will connect with the people watching.