The Burns Night Scottish Special was the latest edition of Middlesbrough’s monthly afternoon concert series Sunday Jazz In The Crypt, curated by former Gateshead Jazz Festival director Ros Rigby. She brings together high quality artists with diverse styles sympathetic to both tradition and innovation. A highlight was Gwilym Simcock’s solo piano set in November; he wasn’t touring, he was just there, and it felt like a uniquely special treat. The duo of ‘Scottish jazz ambassadors’ Tommy Smith and Brian Kellock also gave a typically flawless performance that “harked ahead” to this month’s all-Scottish jazz programme. 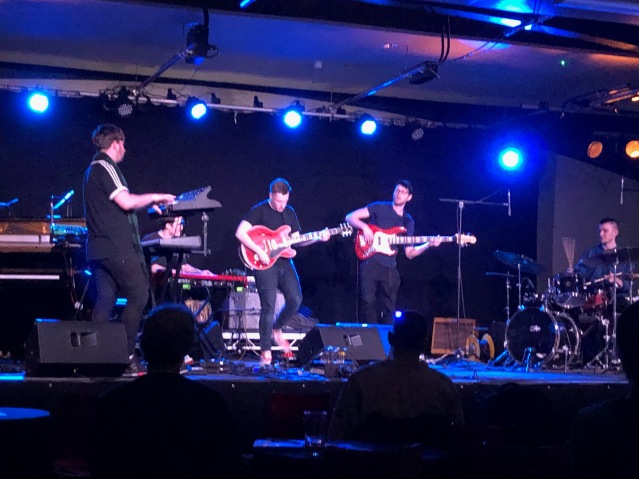 At first glance the only connection between the four groups on its eclectic ‘early Burns Night’ bill might be Scottishness and Jazzishness, but at a deeper level each is akin in all being exponents of different kinds of fusion. Tom Bancroft’s In Common project explores the common ground between Scottish jazz and Indian classical music and musicians. The Fergus McCreadie Trio fuses folk and jazz; Animal Society, jazz and rock; and Georgia Cécile blends selections from the standards songbook and originals drawing on her own personality and background in Scotland. The concert reaffirmed the communicative and connecting power of music to bring people and ideas together from all over the world.

Another connecting theme is the Scottish Jazz Awards, with Georgia Cécile winning Scottish Jazz Vocalist of the Year 2019 alongside Fergus McCreadie who won Best Album for his trio album Turas, after being Best Instrumentalist in 2018. The aforementioned Brian Kellock took it in 2019.

The charming trio of Georgia Cécile with collaborator and pianist Euan Stevenson and bassist Mario Caribe played a pleasing selection of standards but I was more enchanted by their originals. Month of May, about a fleeting summer romance, and the debut single Come Summertime are wistful perfection with a glimpse of her Scots coming through her classic Midlantic jazz singer voice, swaddled in impressionistic piano textures, and a ringing solo on the top notes of the piano. Their personalities shone through.

Also down from Glasgow, Joe Williamson’s quintet Animal Society hark back to the guitar-led jazz rock of post-1975 Soft Machine. They have a pronounced group identity and have just recorded their first album. When I saw them at the London Jazz Festival in November they threw in a lot more low-string metal riffs but their sound is developing in a very interesting way to embrace an impressive range of dynamics from crunchy chords and drilling ostinatos with melodic toplines, to deep breakdown and hints of atmospheric abstraction. Ripples has a spacious post-rock overcoming expansiveness that seemed to share some of the same wistfulness inherent in Georgia Cécile’s music and that of Fergus McCreadie.

Pianist Fergus McCreadie described his work with an outrageously Scottish metaphor: “They’re all tunes inspired by jazz but we all have a love Scottish folk music as well so we try and combine those two, they work well together, like… rice and curry.” The trio’s sound lulls you into a reverie of folksy Necksy misty modal music that somehow, like boiling a frog, before you know it has morphed into some pretty ferocious trio playing, with the precision and violent attack of math rock and prog, not dissimilar to what Animal Society are doing with crunchy chords and tightly arrayed rhythms. 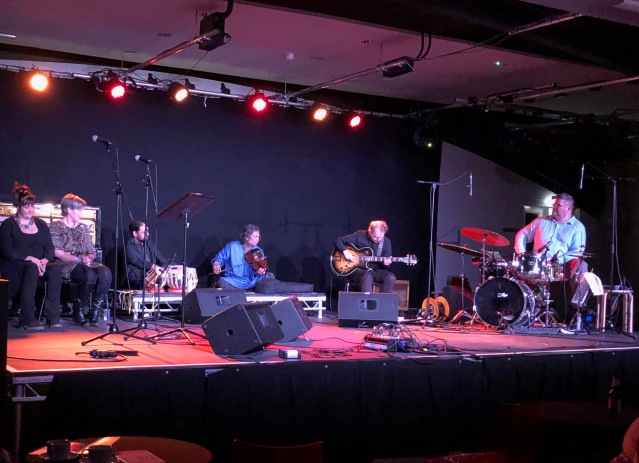 Drummer Tom Bancroft’s In Common project doesn’t slouch either, even over an exhaustive 80-minute set that laid out their diverse blend of Scottish jazz and Indian classical music in some head-spinning time signatures, with some energetic playing with thrilling ornamentations and glissandi from violinist Sharat Chandra Srivastava and guitarist Graeme Stephen. “A rather feisty solo from Graeme there,” said Tom, putting it somewhat mildly after the rock-out of the second part of the suite Flower Child, which, as with McCreadie’s approach, shifted from a delicate wistfulness into the outright visceral. The album is lovely, but live performance really brought out the powerful energy of the group.

In McCreadie’s and Bancroft’s groups the Gaelic and Indian tendencies respectively intersect perfectly with the modal tradition in jazz. Less compelling was the straight ahead jazz-with-tablas workout of Netball, dedicated to Ornette Coleman, but this was redeemed by the solo of the afternoon from violinist Sharat Chandra Srivastava. The explosive fructifying power of the Indian influence on jazz will drive the next instalment of Sunday Jazz In The Crypt when the mighty Arun Ghosh headlines. It should be worth heading south for

LINK: Next dates at Sunday Jazz In The Crypt

In Common are at:

Tagged as: AJ Dehany, Sunday Jazz in the Crypt