Andrew Woodhead’s Pendulums is a thirteen-part 70-minute sequence for bellringers, nine-piece improvising group and electronics that offers a powerful fusion of the emotional and the mathematical, at scale. It has all the excitement of the random factor of conducted large ensemble improvisation and the random-feeling but not random factor of looping parts going in and out of phase with each other to release a sense of discomfiting jouissance that obeys structure but brings it into a richly chaotic experience within that structure. Some of the visuals accompanying the piece demonstrated the ‘pendulum experiment’ wherein a series of pendulums at different lengths are set going simultaneously and you can watch the wave shapes they create visually. What Andrew Woodhead’s ambitious work did was to translate this into sound, into music. It’s an impressive achievement.

Pendulums was premiered on the penultimate night of the Ideas of Noise festival in the Georgian C of E church St Paul’s in Birmingham. Eight bell-ringers were up in the tower, cued via WhatsApp, each bellringer with their own metronome pulse that they would follow, with eight of them independently creating their stem of the eight-part mechanism of looping tones, at once at odds with each other but working together to produce complex polyphony, and often in a different time signature to the band. For example, in the warming up exercise you’ll have heard bell-ringers do, they ring in 9/4 time essentially, for the notes and then a beat rest. It was a trip, and it was extraordinary how effective the communication and interaction was in spite of the band and the bellringers being in different areas of the church, and essentially having irreconcilable differences in technical approach and in the writing. The bells are mechanical and subject to numerical iteration, which was contrasted with the fluidity of the band, semi-freely improvising with detailed conducting from Andrew Woodhead and various graphical scores and written suggestions – which often mirrored, doubled and played off the looping peals of the bells.

But it’s easy to bang on about the impressive technical and mathematical elements of the work when at the time the work has a trenchant emotionality, a real hard moving quality. Overall it reminded me most of the large ensemble works of Eve Risser. There’s a revelry in the cacophonous as much as there is a precision in the allocation of closely written parts that are freely developed. This is a very contemporaneous direction in both improvising and composition where many of the most exciting current practitioners of jazz and improvised music are seemingly going out of their way to make it hard to tell which bits are composed and which improvised, which is good sport but hard work for listener and player alike. Fun, but slightly maddening. This maddening virus has even spread to composers in the spheres of notated music, or classical if you like. 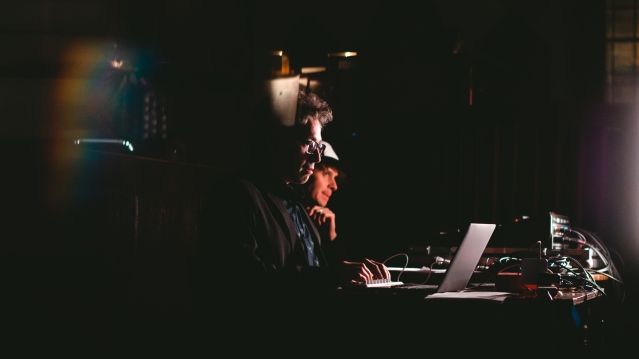 Following Pendulums, Lauren Redhead and Alistair Zaldua performed vox humana, an hour of specially commissioned interactive music for organ and live electronics by women composers. The original compositions were varied but shared strong conceptual underpinnings and an interest in the interaction of performer and composer via open scores, with Cara Stacey’s Aureole applying textures and techniques from Dinaka and Brazil, Allis Ni Riain’s Sour Morning Crimson taking its inspiration from a poem by Northern Irish poet Padraic Fiacc. Annette Schmuckl’s 54 Stops alphabetically orders 54 stops of the organ to determine the shape of the outcome. Sophie Stone’s Far Infrared is of open instrumentation and duration so the performance outcome is essentially a compositional collaboration with the performers, which was also true of Nina Whiteman’s Escape! This opening piece developed a neat conceit of making the performers navigate a video score responding to a series of topographical drawings, with the notion that the performer is the participant in an escape room game wherein the participant has to solve puzzles, and uncover and decipher clues in order to progress from room to room to complete the game. The fusion of organ and electronics was impressively unified; at times the sound would shift and you’d think ‘how is the organ doing that?’ before realising it was the electronics doing that. It’s one of the highest compliments to say that two instruments or instrumentalists sounded like one.

Kit Downes and Tom Challenger have this connection in their duo Vyamanikal. The word comes from the ancient Sanskrit term for flying machines – ‘Vaimānika Shāstra’. Recorded at five Suffolk Churches, the album Vyamanikal was a wonderful surprise, more like sound art and ambient than you might have expected from two such accomplished figures from the ‘jazz scene’. Industrial, ambient, sound art, collage, exotica, meditation… the kind of album it’s hard to listen to on a bus because the noises of the urban soundscape around you merge with the one in your earbuds, which can be a lovely and thrilling experiment in Cagean sonic psychodynamics, at the same time as distracting and confusing. Vyamanikal was the pair’s second release after 2012’s relatively conventional Wedding Music which was closer to what you would have expected and closer to the live experience of Vyamanikal rather than its album incarnation where the music is constructed with a level of detail and subtlety intended to facilitate deep and repeated listening such as you can’t with a unique live event where everything has necessarily to be a bit more immediate.

In concert at this Birmingham church (a different St Paul’s to the renowned Huddersfield one of Wedding Music), parts of the 43-minute set sounded like one of the scary modernist composers from after modernism ie. Harrison Birtwistle or Brian Ferneyhough. It was not relaxing. Dark, discordant, dislocating and uncompromising, it has a certain majestic solemnity but the pair’s responsiveness to each other keeps it tripping along with a curious lightness borne of trusting invention. Kit Downes’ command of the church organ dramatically underlined the depth of his experience and familiarity. There was a striking difference between his command of the considerable technical and dynamic difficulties of the church organ and the writing of organ newbies in the set before, and even an experienced player like Lauren Redhead couldn’t compare to Downes’s virtuosity at working the impossibly complex workings of the organ stops.

It really is a special pairing. As a duo of church organ and sax, to a baptised-Catholic atheist who gets the fear of God from bloody church organs, it seems way better than it has any right to be. They should improvise film scores; Vyamanikal in all its manifestations and moods would fit right in with that Uber-credible paradigm of contemporary film music practised by Mica Levi, Bobby Krlic (The Haxan Cloak) and Joker Oscar-winner Hildur Guðnadóttir. The music is strongly emotional but complex in its evocations of those emotions. Unsettling, hard to interpret, this is a long-awaited iteration in the language of music to let it speak for itself through ambiguity, without explanation. It is musical poetry rather than prose.