The Liverpool Jazz Festival has done that rare thing and managed to put together an exciting programme with innovative music and nonetheless attracts a good audience. I was there for the Festival’s third and fourth days, the Saturday and Sunday, but the interesting and unusual programming choices I witnessed do really make this festival stand out. 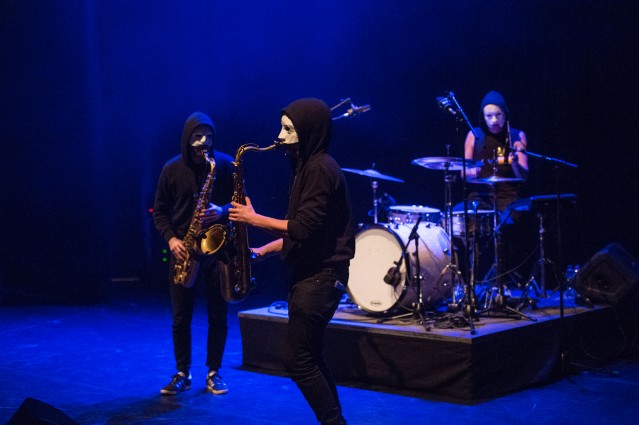 Saturday was not a day for the faint-hearted. Aficionados of smooth or gentle jazz will have done better to look away, but if you like jazz that gets in your face this was a full day of it.

Sunday was saxophone day. A whole day of workshops, trade stands and lots of enthusiastic amateurs and professionals. In the theatre the day started with the latest performance in the album launch tour of Moonmot. Their excellent album was reviewed HERE  The live performance took a couple of numbers to get going but then settled into an enthralling mix of composition and improvisation.

An outstanding collection of improvisers with a programme from their double album that is inspired by, but definitely not copied from electric Miles. In fact, if it’s not sacrilege, I’d say it’s better, it’s a 21st Century version. It might be how Miles would have sounded if his collaboration with Jimmy Hendrix and Gil Evans had come about. Keefe is a real find, and when Orphy Robinson and Pat Thomas started feeding off each other the audience erupted.

Their chordless sound was more influenced by Ornette Coleman than by Monk but very well done. Their recent addition of Smith makes this a fine quartet.

This is an all star quartet which reminded us all that Ornette Coleman was more than just a pioneer of free jazz. As a composer he produced some of the most memorable melodies of the modern jazz era and his early quartet with this same line up was undoubtedly a key influence on everything that has come since.