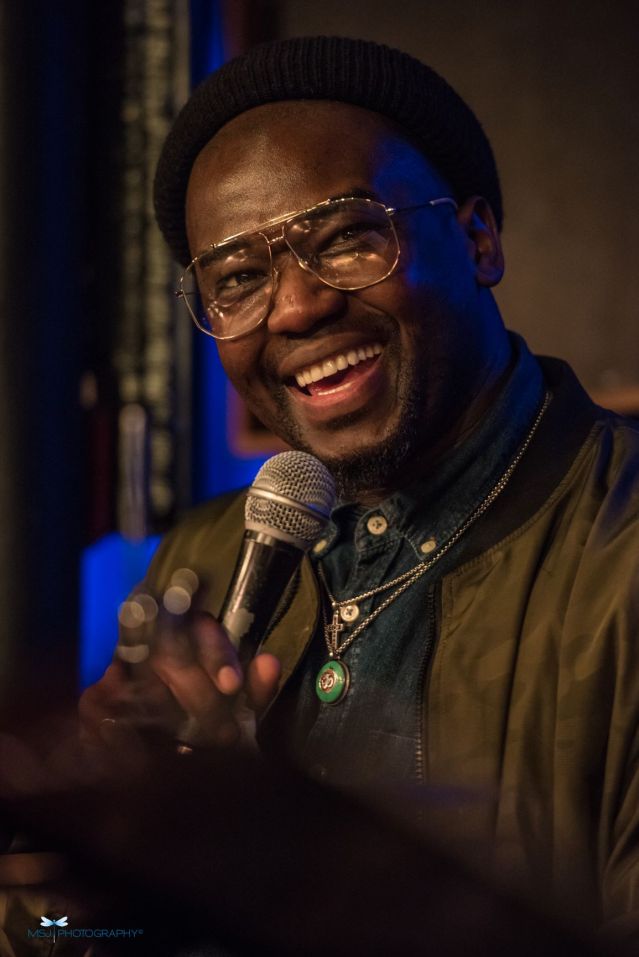 “My name is not Jackson Miller. It is Rodney Green.” The name of the band is Jackson Miller named in homage to Charlie Haden who had a dog called Jackson; when he couldn’t remember someone’s name he’d call them Jackson. Miller comes from Mulgrew Miller. Rodney Green was only sixteen when he started working with the great pianist. Rodney Green’s drumming is distinguished by his intricate snare work. The hallmark of his style is that fast rolling of the sticks that gives his playing both detail and force.

His website is RodneyGreenJazz.com. “Yes,” he says, “I still use that dirty word and if you wanna talk about it to me I dare you. Jazz music is the music that inspires us. All my music is about something. I want my music to keep evolving. People say the music is dead but if you’re not dead, what then?” 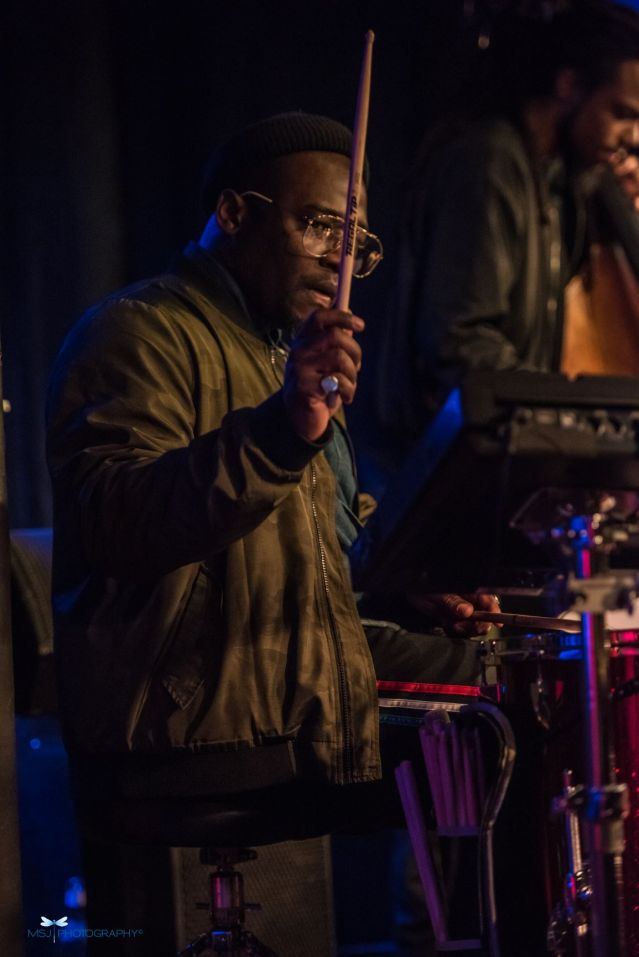 The music is an interesting mix of bebop jazz language but rhythms and grooves often owing coming from a different place with suggestions of electronica played acoustically. The political charge reminds you of the radically political music of Archie Shepp. R&R has a super-fast bebop themes with intricate rhythmic doublings and triplings. This is fast Parkeriana boasting the confident assertiveness of the trio.  It doesn’t feel nostalgic; they take pride in the language. 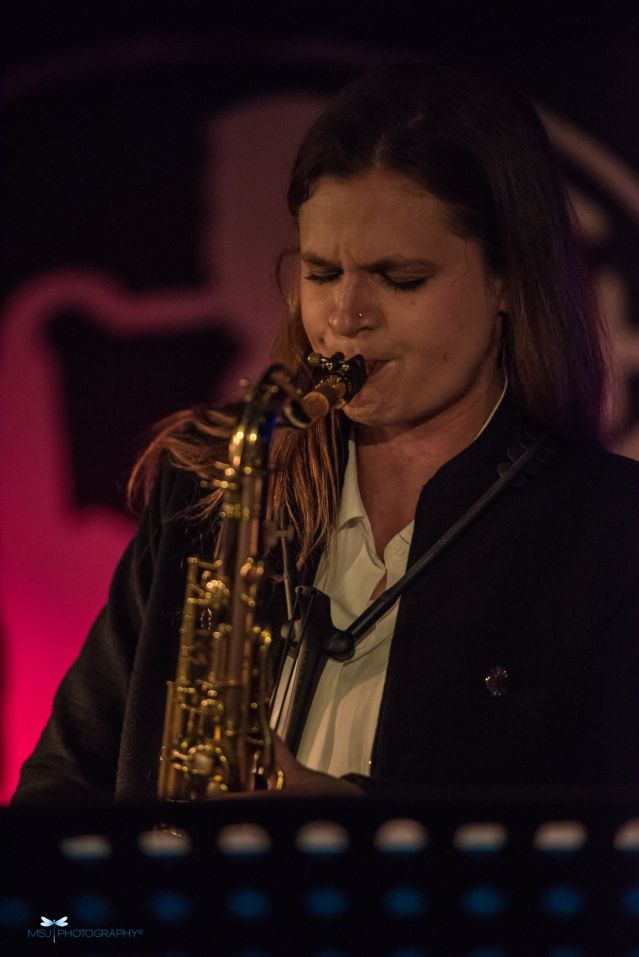 Who would have known Nicole Glover was actually playing someone else’s saxophone? “This isn’t even her horn. A taxi driver who put the horn on the top. And she killed him.” Her phrasing is tight and complete, warm and full. She seems to speak in cantos rather than couplets. “She bad, she tough. It’s not easy. To see my little cues, and travelling difficulties. Nicole is always teasing me cos I ask her to do the most impossible things.” 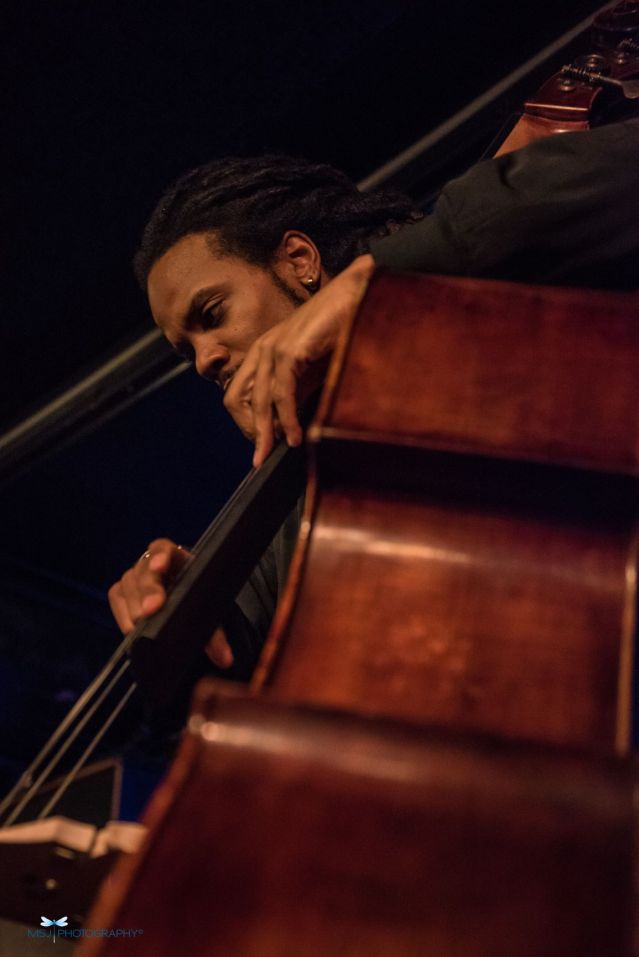 “Mr Tyrell Allen playing a whole lot of bass. Ms Nicole Glover playing a whole lot of saxophone.” The three make a great combination. Each is brightly articulate. During a ribald line of super-blue lightning I wanted to whoop. Green can instantly respond with detail while Glover issues exciting flurries of notes. Sometimes the music has that rainy day jazz feel of bluesy rumination in long languorous passages before they give way to more combative energised sheets of sound.

“One of the by-products of trying to do something is I can understand why people don’t wanna do it. I’m using samples. They say you never discuss religion or politics. At the Blue Note I played a set. They loved it. Then I played a sample about abortion, and they got up and walked out.” 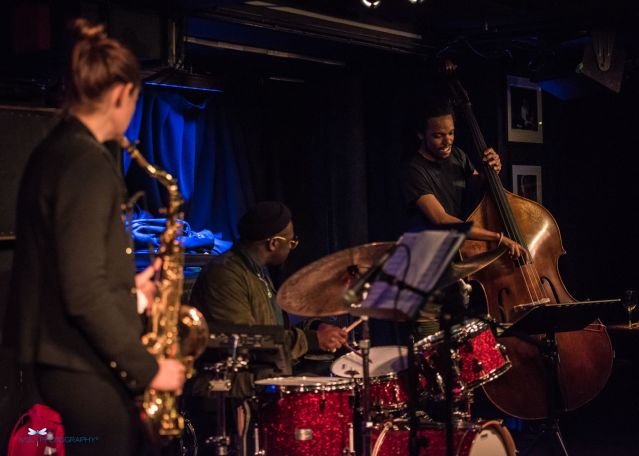 “You are listening to the sounds of Jackson Miller.” A tap with the stick on the Mystery Box and we hear Wayne Shorter talking about the ESP album. On This Must Be Deep Gil Scott Heron says  “Life… that’s a very limited life. One simple fact is everything that we call life was made up by people no smarter than you.” The single topic poverty in America looms large, with samples concerning Camden New Jersey, “the poorest city in the nation and the most dangerous. The story of Camden cannot be avoided any more.” Alive On Arrival (Beast In The Field) includes a sample of Henry Borrell’s speech to abolish slavery: “If a black man is not allowed liberty he is no more than a beast in a field.”