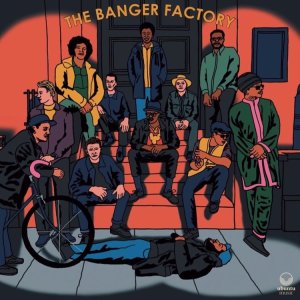 What does it take to keep a well-trodden medium fresh? Is instrumental prowess enough? It’s been 65 years since the genesis of hard-bop and one might think it’s fast running out of anything remotely new and interesting to say. But for this listener at least, a blend of new voicings and unusual instrumentation brings something refreshingly different to savour.

Two years ago, Mark Kavuma produced an enjoyably workmanlike debut album. But his latest, The Banger Factory, is a huge step forward for this Ugandan-born trumpet player. Although the album is released under Kavuma’s name the process that brought it about was a collective one, resulting from a weekly residency at Brixton’s POW club and many sessions in rehearsal studios.

Musicians came and went during the process with the current line-up coming from those who stayed and for whom Kavuma wrote tunes to feature their particular talents. The benefits of that workshopping process can be heard in the seven tracks on this excellent album. The tunes are well-orchestrated and the playing is tight where required yet also spacious and swirling.

The classic hard-bop line up of trumpet, tenor, piano, bass and drums is augmented in this band by vibraphone and guitar with Reuben James’s subtle organ giving a distinctive and effective underwash. On four of the tracks tenor saxist Mussinghi Brian Edwards is joined by fellow tenor player Kaidi Akinnibi bringing added muscle to the themes.

Lullaby To A Fading Star is a ballad feature for Kavuma’s trumpet accompanied by rich horn harmonisation on the theme. Kavuma is not a high note specialist. He has a great mid-range tone, augmenting lines with periodic trills and growls.

Big Willie swings in a Savoy kind of way and features more Mrakpor vibes and some Christian-like guitar from Zaitz. The Songbird is a sax feature with lush backing chords. Mrakpor builds on an ingeniously effective looped fragment of Now’s The Time, building tension that is released into a swinging vibes solo.

The Banger Factory’s CD cover is a sort of contemporary urban nod to the classic 1958 Great Day in Harlem shot. It’s neo-soul style masks something far more inventive. The combination of fresh instrumental voicings and well-thought arrangements puts The Banger Factory several steps ahead of the field. It is a well-conceived work and having seen Kavuma in the flesh a couple of times I can report that he’s a trumpet player to be watched and followed.