Here’s an amazing story. The music world is full of surprising international connections, often proving creatively fruitful. One such connection is a rare link between Greece, Sweden and worlds of jazz and folk music.

It goes back some decades, when a Swedish jazz trumpeter, Ale Möller, moved to Greece and took up playing the bouzouki in the Greek folk manner. It then occurred to him that he should transfer his skills to the folk music of his home country, playing the mandola as his string instrument, and that eventually led to a deal with ECM Records, with a line-up including singer-violinist Lena Willemark and several distinguished Swedish folk and jazz musicians. Two extraordinary albums they produced – Nordan (1994) and Agram (1996) – included the brilliant saxophonist Jonas Knutsson and the distinguished bassist Palle Danielsson in the personnel.

Now there is a new Swedish link with Greece, for Knutsson is performing and recording with Athens-born guitarist Tassos Spiliotopoulos, once a UK resident working with artists including percussionist Asaf Sirkis, and living these days in Sweden.

On Friday they came with bassist Robert Erlandsson and drummer Fredrik Rundqvist to Birmingham, the penultimate date on a four-date England-and-Wales tour to promote the quartet’s latest album In The North (Anelia Records).

They opened with Tassos’s original composition New Land, a gently flowing piece, on which the guitarist demonstrated his excellent use of tonal colours and articulate phrasing. He uses a single effects board, and changes the tones with great taste and subtlety, creating an attractive stream of sound that always matches the mood of the piece. 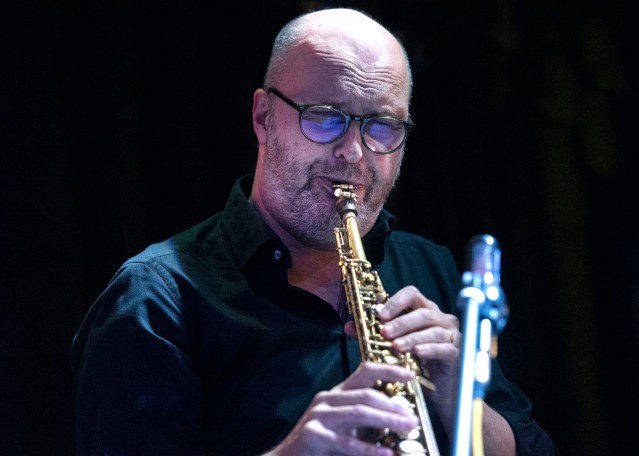 Knutsson played soprano throughout the gig (in other groups he also plays tenor, alto or baritone), and on the second piece By Way Of Fire he really stoked up the temperature to white hot. Opening with some skilled slap-tonguing, a percussive effect dating back to the earliest days of jazz saxophone, he then reeled off a furious flurry of notes before building the passion even further with beautifully crafted phrases, edged with occasional growls and high-note yelps. His brilliant use of space is the key to his commanding solos: each gap promises a surprise, and then the surprise is delivered.

Later in the performance, Knutsson reeled off a raging lava stream of adapted diminished scales on the driving piece Corridor, evoking an authentic Eastern feel (and he later told me of his great love for Indian music). This piece also featured magnificently intense drumming from Rundqvist, with excellent interchange with bassist Erlandsson. There was more marvellous playing from the drummer on Cosmic Motion, a darkly powerful piece composed by Tassos. Erlandsson had his own impressive feature on the ballad Downfall Monologue, though I do wonder if ballads are really the best vehicles for bass showpieces, as there is little scope for the percussive qualities of the instrument to emerge.

The guitarist’s soloing is consistently enjoyable, but he really took flight in the two final pieces of the evening, Ask Harry, and the encore Emerald Blues. On the latter, he had a long and wonderfully intense duet with Knutsson – a feature perhaps well worth developing further in the future.

Tassos told me of plans for more recording in London before he returns to Sweden. There’s clearly much to look forward to from this very fine player and composer.