The Orchestra Nazionale Della Luna as a band name needs a bit of imagination. For a start it isn’t really an orchestra – it’s a quartet, and neither is it “national” in any conventional sense since it comprises a Finn, two Belgians and a Frenchman with an album on the Hungarian BMC label. 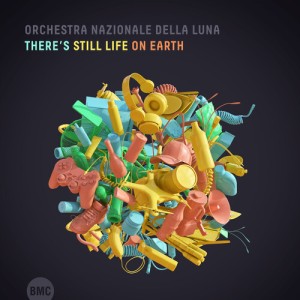 Ikonen and Hermia formed the band 5 years ago and the group’s eponymous first album came out in 2017. That was a more conventionally European sounding album. All the musicians have been busy elsewhere since then and have developed their individual sounds in lots of different groups.

Here the jazz is infused with the sounds of Indian, Arabic and electronic music. In particular pianist Kari Ikonen has developed a device called a Maqiano, a piano-attachable device which allows him to play Maqamat – the microtonal Arabic scales on the piano. Still in prototype I have no doubt that other pianists will be interested in this. More non-western sounds come from Hermia playing the bansuri, an Indian bamboo flute.

Several tracks stand-out for me. Myrkkysienikeitto, which seems to translate as poison mushroom soup, is taken at quite a stately pace. It starts with the saxophone melody over a warbling Moog alternating with piano. The two front line instruments then trade improvised sections. After a few minutes the rhythms all fragment, the piano pounds and there’s a dialogue between the drums and piano before the Moog and sax return to the melody..

Al-Bahr by contrast has a definite middle-eastern feel to it. The Maqiano and bass start the track before the very Arabic rhythm comes in and the sax picks up the melody. What follows is mostly composed, with only short sections of improvisation, but there’s so much variety in the rhythms and interchange of melody that it remains a fascinating track.

That’s followed by another track Ecocracy which starts with an almost free improvisation with a middle section containing lots of electronics and Moog effects .

There’s a huge variety in this album and it’s absorbing from the start. Perhaps not an Orchestra, but a very fine quartet.