Creative limitations release the imagination. As anyone trying to write or work creatively during the lockdown may be finding, the abundance of time can leave you floundering among the infinity of possibilities, grasping for the silken thread through the maze of noise. The poet Robert Frost likened free verse to playing tennis with the net down, and similar criticisms beset improvisation. It’s not true though. If anything, when the net is removed musicians tend to fall back on style (and bad musicians fall back on ‘licks’). 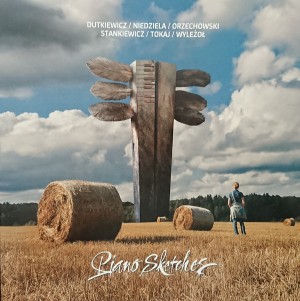 Piano Sketches is an album of six solo piano tracks performed by six Polish pianists, with a jazz sensibility expressed through not only its adoption of the jazz style throughout, but in its typical mixture of both over- and under-preparedness. Masterminded by creative pianist and piano preparer Leszek Możdżer, it is an audiophile treat. The Steinway piano is very carefully set up in a mathematically resonating 28-metre room at Custom Custom 34 in Gdańsk, recorded over two days a HUM RS-2 stereo ribbon microphone with custom preamps to tape on a Studer A827 24-track and analogue mastered and lacquer cut at Abbey Road. The sessions apparently involved a short rehearsal and a stricture that each pianist played only one take, mimicking the nervous all-or-nothing moment of a live performance, which can both liberate and restrict your imagination. I would have wished that they’d let each of the players settle in a bit more; there’s a tendency to either over- or underplay, but that’s jazz, and others will have different preferences .

The CD opens with Atur Dutkiewicz’s Mazurek Trane & Roll. Mazurek is a highly decorated super-sweet Polish easter cake and the track is similarly rich, in a bluesy hard-bop style of jazz. It rolls every connecting note between every chord and phrase at the edge of taste. Piotr Ozechowski’s Blue Star, composed by Ecuadorian bassist Daniel Toledo, opens on a more disconnected note choices before settling into a gentle vamp somewhat in-on-a-limb. Again, there’s quite a lot of playing going on. The high resolution of the sound captures it all but exposes a common ‘unforeseen’ or emergent problem with such high fidelity: during the last minute of the track he is stamping his foot with some force. It made me stop the track a couple of times to figure out what it was. I can’t say this additional rhythmic element improves the track any more than John Bonham’s notoriously squeaky kick drum pedal improves Led Zeppelin (I won’t mention which track; if you’ve heard it, you can never unhear it).

There is a decent warmth and depth and resonance to the sound of the album and the piano but sometimes the playing is too much to afford a chance to hear whether there’s any benefit from the fact that they’ve tuned the piano to 432Hz or whether that resonates better in the 28-metre room. Concert standard is 440Hz but there’s a notion on the internet that the so-called Verdi tuning resonates with the cosmos better. The pseudo-maths are bunkum but the lower pitch makes it easier for singers, which is why Verdi supported it. For a piano it’s unclear whether essentially detuning your keyboard to be a bit flat improves anything. For a good-humoured debunking of the pseudo-science, check out Adam Neely’s videos . For examples of the pseudo-science check out most of the rest of Flat Earth internet, where it’s the “heartbeat of the planet“…and you’d better believe it!

The album starts to open up to more spacious sense in Kuba Stankiewicz’s gently Brubeck-esque Foucault Ballad and Piotr Wyleżoł’s Shadows Theatre let us hear into the piano a bit more. The harmony is simpler and more open, letting us hear between the intervals (even if the chord voicing in the left hand are quite thick). Michał Tokaj’s Awakening / Oblivion is a delicately-played running-on of two compositions by D. Oleskiewicz and Bud Powell, and Wojciech Niedzala’s For D. has a luminous appeal. The thing is, and this is driving me crackers, the piano temperament just sounds like normal even temperament rather than Pythagorean. If you listen to a piano tuned to strict Pythagorean temperament, the tuning really destroys complex harmony. The thirds are all wonky, there are wolf notes everywhere and the F# is unplayable. This album doesn’t sound like that in the slightest, though I’m assured it was tuned to Pythagorean temperament. There is some peculiar warmth, but we have a mystery. I suspect it’s tuned to an even temperament with some alterations made to nod toward Pythagorean mathematics without making it impossible to play. I’ve run the album past people with vastly better ears than mine, and they couldn’t really advise me. There are so many notes at tempo and so much complex jazz harmony going on there isn’t really sufficient opportunity to hear into the piano or explore any unique properties of the temperament or tuning.

It’s an impressive and thoughtful project with some engaging jazz playing and a warm and lovely sound—but so many things go into music. Keith Jarrett’s Köln Concert is the biggest-selling solo jazz record ever and half the piano wasn’t working properly, a situation that forced Jarrett into some transcendent creative thinking resulting in a performance that has rarely been matched. Laura Nyro’s New York Tendaberry  bears comparison with Joni Mitchell at her best, but has the worst-recorded piano I’ve ever heard, horrifyingly distorted and terrible but with a wonderful performance by an under-regarded musician. At the end of the day, infinity is too long to leave to the imagination, and music is too complex and mysterious a thing to leave to the mercy of audiophiles.

AJ Dehany is based in London, locked down in Teesside, and writes independently about music, art and stuff. ajdehany.co.uk

Piano Sketches is available on vinyl, tape and CD from AC Records