In lockdown with… pianist George Colligan

American pianist, composer and educator George Colligan speaks to us about some of his musical memories, revisiting old favourite albums, and both the possibilities and difficulties of making music at this strange time.

First album you purchased as a “jazz musician”?

Many of the crucial jazz recordings in my early days were either given to me by a neighbour or I signed them out of the library. I think the first album I bought with my own money was a cassette, probably Return To Forever’s Hymn of The 7th Galaxy. 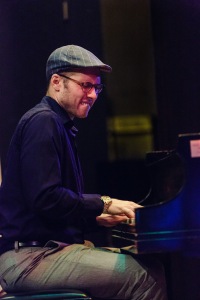 I picked it up in a music store in my local mall in Columbia, Maryland, mainly because I liked the album cover and had heard of Chick Corea. Listening, I remember being intrigued by the rock and funk flavour of the music, the textures created by the electric instruments. I remember thinking, “Who is this drummer Lenny White? He’s incredible.” It’s ironic that I later got to play with Lenny quite a bit.

I have always been much more open to fusion and jazz rock than some folks realise. I’ve done a lot of “acoustic” jazz but I’ve always been interested in more contemporary grooves and sounds. I love Rhodes and keyboards. I’ve never been snobby about that.

What are you listening to right now?

I’m going back and listening to some old favourites. Like Shirley Horn’s first album from the 60s, Loads Of Love. Horn was one of the great jazz artists of all time. I love her piano playing. I’m always amazed at her phrasing and love her repertoire choices.

Also Bill Evans’ Sunday At The Village Vanguard. There is a great documentary about Bill Evans on Amazon streaming. His life, like many of the tragic tales of the jazz greats, is very sad. He was an amazing artist but a terrible role model as a human being, sadly.

Have you done or watched any livestream gigs since lockdown?

I watched one of my Portland State University students give a Facebook live performance. Her name is Anna Meyer; she’s a Portland native. I think she’s got amazing potential.

I was posting videos on Facebook of myself playing piano every night. I’ve backed off a little because I’m working on some things that are perhaps not ready to be heard by the public! I may do a livestream concert at some point. It’s quite hard to totally focus because my two sons are quite active and that’s somewhat of a distraction. I had my own office at Portland State, I didn’t anticipate that my home office would ever become the only place to make music!

Has this time in isolation inspired any new creative ideas?

This is a very confusing time for humanity. In terms of sheltering in place and basically staying at home most of the time, as a pure concept, it’s great for musical development. Yes, we can be productive and focus in a way that perhaps we couldn’t if we had the option of going out and socialising and so forth. However, it’s the reason that we are in this situation that is utterly frightening and depressing. So I’m sort of moment to moment at this time. I can wake up in the morning and, if the sun is shining, I may be able to convince myself that life is fairly normal. Two minutes of news from my phone can send me into a downward spiral. I’m sure I’m not the only one who feels this way. I’m less concerned about the virus than I am about the lack of leadership in my country and the irrational politicisation of the situation. It seems like other nations are coming up with plans of action based on science, data and a true concern for their citizens. That’s not the case here, unfortunately.

Most memorable incident in your career or education?

I often recount the story of when I met McCoy Tyner. In 1994 I was playing a weekend run with Gary Bartz and Idris Muhammed at the One Step Down in Washington D.C. This was a small venue and in order to get past the bandstand, patrons had to walk in front of the piano. We were playing Miles’ Mode and I was about to take a piano solo, when Tyner, who had been performing at Blues Alley down the street, walked in front of the piano and waved at us. At this point in time, Tyner was my biggest musical influence; my playing was essentially a sad imitation of his playing. Seeing him walk in front of the piano made me think, hm, maybe I need to come up with my own ideas.

What are you most looking forward to once this is over?

I want to play music with real people in the same room together!