In these totally unfamiliar times, jazz that is lively and adventurous is something we can perhaps use more than ever. And it is exactly what Superposition, the new band from a central figure in Finnish jazz, drummer Olavi Louhivuori, have delivered in abundance in their eponymous debut album. 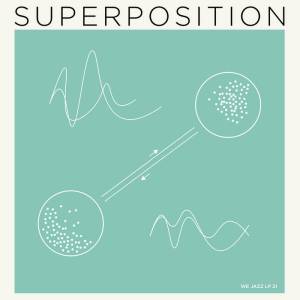 Louhivuori is one of those artists whom other musicians, not just from Finland but from all over the world, have been seeking out to work with for more than a decade. He made his debut on the international scene in 2009 as part of Polish trumpeter Tomasz Stańko’s Scandinavian band with guitarist Jakob Bro and pianist Alexi Tuomarila, formed after Marcin Wasilewski’s trio decided to strike out on their own. Stańko’s brilliant album Dark Eyes, made with that Scandinavian band, gave a clear pointer to a major talent about to blossom.

By that point Louhivuori had already attracted attention within the jazz scene with Ilmillieki Quartet (including trumpeter Verneri Pohjola), with Oddarrang, and as a result of his first solo album Inhale Exhale (2008). After the album and the tour with Stańko things got really busy for the drummer, but he kept on choosing his own paths, choosing projects in which he could see a musical challenge. Important records and collaborations kept coming. Above all his work with Mats Eilersten and Alexi Tuomarila in the trio under the name of Tuomarila gave a strong demonstration of quite how much he was growing as a musician.

The Louhivuori that we find in his new band Superposition is a fantastic drummer, but also a very interesting composer. Alongside Mikael Saastamoinen on bass, it’s mainly the two women in his new band who justifiably draw in the attention here: Linda Fredriksson (alto and baritone sax, from the band Mopo) and Adele Sauros (tenor sax, from the band OK:KO) play freely, decisively and adventurously; they have real class.

What is appealing about their first album together is its freedom and its beauty. The compositions are mostly by Louhivuori, and with one each from Fredriksson and Saastamoinen, and the four musicians have remarkable ways of building and combining textures and of springing unpredictable surprises.

Louhivuori and Saastamoinen are a super-interesting rhythm tandem and play wonderfully well, but the sound of the band is really determined by what Fredriksson and Sauros both do, and do so well. These two players have an uncompromising urge to get the most out of their instruments, yet without neglecting what the compositions need in terms of atmosphere and colour. Their solos are invariably compelling and their ensemble playing is very classy too.

Superposition is an excellent jazz album with plenty of variation and colour. It can be warm and melodic, but also driven, obstinate and wilful. There is such energy in this quartet, it makes the prospect of hearing them live, which for the moment is so elusive, a particularly exciting one.

Superposition is on the Helsinki based We Jazz Records, a record label of real importance, not only in Europe: their catalogue of releases in the last two years has made them a force to be reckoned with worldwide. The Finnish jazz scene has been exploding for years and We Jazz has brought us closer to it. With Superposition, they have performed this valuable service again, and brought us the vivid music of an extremely fine jazz quartet.

*This is Sebastian’s English version of Dick Hovenga’s review published in Dutch on the Written in Music site.