Ali Affleck is a self-confessed ‘vintage vocalist’ specialising in powerful performances of early jazz songs and styles. She was voted Best Jazz Vocalist by the Scottish Jazz Federation in 2014. Ali has been central in assembling the CD collection To The Jazz Bar With Love, a fundraiser for The Jazz Bar in Edinburgh which has its 15th anniversary in July. The CD features tracks from musicians with links to The Jazz Bar and so acts as a showcase as well as a financial support during lockdown. Interview by Mark McKergow: LondonJazz News: How did this CD come about?

Ali Affleck: I was in touch with Edith Kyle, who runs The Jazz Bar here in Edinburgh. Things were starting to get cancelled with lockdown looming – gigs were falling through all over the place. We had this idea for a CD collection, ‘jazz in times of corona’ or something. They recorded a 10th anniversary CD there in 2015, and so it seemed fitting to do something as a 15th anniversary tribute.

I started asking around; I’ve been playing there for years and already knew some of the people I wanted to ask but I also wanted to be inclusive. The word went out and lots of tracks arrived! I couldn’t use all of them which was a shame. I prioritised the people who depend on The Jazz Bar, those with long standing residencies, some established names, some newer musicians and also some blues and electro styles.

LJN: Tell us a bit about why The Jazz Bar is so special…

AA: It’s quite a unique place. Its history makes it special. Bill Kyle who started it, he was such a mighty figure, he was always there. He could be a man of few words, mind. He was putting on modern jazz, funk, that sort of thing. He didn’t do early jazz but still he gave me a date. And when I played he was there, and gave me another date. He did that for others too… gave everyone a kick of the ball. You wanted to do your best for him.

Sadly Bill died in 2016, but the vibe goes on led by his daughter Edith. People love it, it’s like a family, really unique. Musicians just pop in, there’s always someone you know there, the music’s good… it’s a refuge. There are at least three gigs a day and four on weekends – that’s a lot of gigs! It only ever shuts on Christmas Day. And now of course it’s been forced to close.

LJN: How did you go about gathering and arranging the tracks?

AA: So many people sent in material – there could have been 40 tracks! I listened to them all and tried to come up with a logical combination and place to put them. Recording quality was also a consideration – we wanted material that sounded fantastic.

I am hoping people will buy the CD. The musicians have been so generous in giving the tracks. The Jazz Bar is a symbol for jazz in Scotland – perhaps the only place in Scotland that only features jazz. The Blue Lamp in Aberdeen is also held in high regard but the owner Sandy Brown sadly died just last week so the future of that is uncertain. The Jazz Bar is a vital place – we just can’t lose it. It’s precious.

LJN: What are you particularly pleased to have featured on the CD?

AA: Mezcla is a world/jazz fusion band from Glasgow led by bassist David Bowden who are attracting a lot of attention – David was one of the very first to come forward for this project with Auckland Hill. Alan Benzie is a brilliant young pianist and we have a trio track from him, There Will Be Other Sunsets. He’s extraordinary, so much emotion in his playing. It’s great that we have Norwegian-born guitarist Haftor Medbøe on the album with Happiness Shines, he’s done so much with Edinburgh Napier University and Jazz Scotland.

There’s some great blues – John Hunt (born in London but been up here a long time) performs Sun Come Shining in a real old-school style with his guitar. On the other side of things, The Upward Spiral from keyboardist Steve Hamilton is electro-flavoured with some lovely soloing. And Graeme Stephen’s track Islay is lovely, very emotional – he moves around under the radar and then pops up with something super like this. 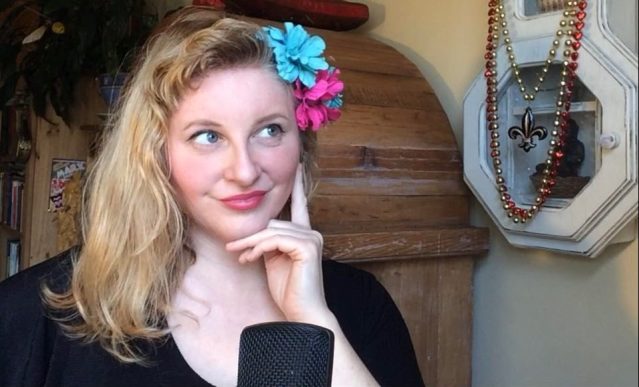 LJN: And you have a track as well?

AA: Yes, I wanted a not-too-trad track, so I am featured on St Louis Blues along with my band The Copper Cats. I’ve been in Edinburgh for 10 years this time around, and I’ve worked with trumpeter Colin Steele and saxophonist Dick Lee for near on all that time. They understand the concept of what I’m doing. Colin Steele has his own track too, a Scottish traditional music-influenced tune called The Sidestep. There’s a lot of overlap between the musicians on the album as a whole – it’s just like The Jazz Bar in that respect.

LJN: What else have you been doing in lockdown?

It’s been a nightmare! This was supposed to be a big year for me, I had some big gigs booked like the French Quarter Festival in New Orleans, Cyprus, Switzerland, New York, two massive tours with Jazz Scotland, a Japanese band coming over… It’s all being rescheduled, and it’s a real challenge to string things together so the dates work.

Otherwise I’ve been trying to improve my banjo skills, and progress the backlog of pieces and ideas I’ve never worked out – I used to work for the BBC and would be walking down Oxford Street humming into my phone. I thought about live streaming, but decided against it and have been pre-recording material instead. I contacted stride pianist Andrew Oliver who was happy to do something. Colin Hancock is a young cornetist from Austin, Texas, who I got in touch with – he records on wax cylinders! So we have been putting tracks down, like Make Me A Pallet On Your Floor. I’ve also been working with gypsy guitarist Jonathan Stout, we have recorded Some Of These Days.

It’s been a nice way to meet people virtually, get to know them a little bit. These international collaborations are good – I’m American and Scottish, so I can work on either side of the pond and I’d like to do more tours in the future.

LINK: To The Jazz Bar With Love is available now on digital download