A year ago a London-based jazz singer caught up in the Windrush scandal was threatened with deportation. Bumi Thomas’s new release reflects the struggles that followed, says John Bungey. 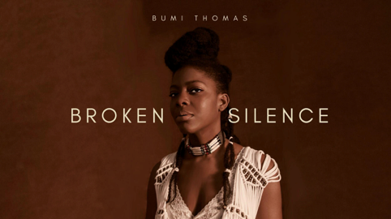 Last June Bumi Thomas, a singer born in the UK who had spent most of her adult life in London, was told by the Home Office she had 14 days to leave the country. A petition to grant Thomas British citizenship attracted more than 25,000 signatures and made national news. A judge eventually ruled that she could stay with friends and family here rather than return to Nigeria from where her parents had emigrated in the 1970s.

Thomas, who has played at the Jazz Cafe and in the EFG London Jazz Festival, recorded her five-song EP, Broken Silence, in the heat of her fight for citizenship. It comes out exactly a year after her deportation letter landed on the doormat. She says that the trauma she went through “is a microcosm of that being experienced right now by millions of people of colour who are suffering intergenerational racism and the disproportionate impact of a global pandemic”.

Her new music mixes R&B, reggae, high life and afrobeat with jazz. It’s heavily rhythmic with a confident swagger and is strikingly original in parts. Black Child, the first single, talks of her personal experience and the importance of standing up for civil rights. The song Ekwueme (Breathe) takes on new meanings given the struggle of coronavirus victims and the death of George Floyd (“I can’t breathe”).

Thomas, who is 37 this month, has shared stages with the late Tony Allen, Melody Gardot, Rhiannon Giddens, Ayanna Witter Johnson and more. She adds: “Music allowed me to process my thoughts and emotions, archive my history, release the trauma and transmute it through an empowering creative experience.”

Thomas was born in Glasgow in 1983 just months after the British Nationality Act, a law that stripped the children of parents from British colonies of the automatic right to full citizenship. Her parents were unaware they had to register their daughter under the law.

Last October a judge ruled that Thomas’s deportation was not in the public interest, adding that she had made a valuable contribution to this country.

Broken Silence will be available to download on all major platforms from June 12 with a vinyl release at a date to be confirmed.