Saxophonist and flautist Dave Glasser is known on the New York jazz scene and beyond as a musician deeply rooted in the history of African-American improvised music. As lead alto in the Count Basie Orchestra and a former sideman with the likes of Dizzy Gillespie, Illinois Jacquet and Clark Terry, one can certainly see why. But his latest effort, Hypocrisy Democracy– which came out last month on his own Here Tiz label- shows that Glasser is not afraid to make a strong artistic statement. Backed by a stellar rhythm section of pianist Andy Milne, bassist Ben Allison and drummer Matt Wilson, the altoist leads us through eleven energetic, politically charged tracks which encompass a wide range of influences and give the listener plenty of food for thought. 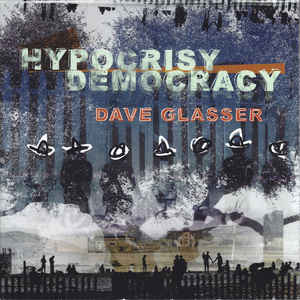 The opener, Knit Wit, with its starkly dissonant opening theme of double-tracked alto and soprano, is an ode to chaos arising from political misunderstandings. The saxophonist uses his punchy, dark sound to his advantage here, trading phrases with Wilson in a no-holds-barred dialogue. The soprano-led It’s Nothing New is similarly exploratory, its polite, groovy introduction soon giving way to an anarchic, late-period Wayne Shorter-ish free-up; a contrast, according to Glasser, designed to encapsulate the inevitable breakdown of our political and economic systems. The willingness of Glasser and his bandmates to take improvisational risks is a key feature of this music, and it lends the group sound an edginess which mirrors the saxophonist’s political agenda.

That said, there are several more intimate moments. Coffee, Dogs and Telelogs, which tackles twenty-first century addictions to caffeine and mobile phones, is a fragile discussion between alto and bass, Glasser’s wispy tone occasionally sounding like a soprano. The impact of the saxophonist’s early mentor, the late Lee Konitz, is apparent here as it is in the appropriately titled Glee for Lee, a coolly lyrical duet with onetime Konitz collaborator Wilson. Both of these tunes are based on standard chord sequences (What Is This Thing Called Love and All The Things You Are respectively), showing Glasser’s staunch links with the past, but neither is overly derivative; the saxophonist has internalised the music of his heroes deeply enough that he is able to speak their languages with his own unique voice.

Other highlights include the Coltrane-esque Freedom, whose political message speaks for itself. The altoist adopts a harsher tone on this one, using multiphonics and other extended techniques to explosive effect, and ultimately leads the band into a frantic time-no-changes section featuring a superbly pointillistic piano-sax exchange. Minor Madness is in a similar vein, seeing Glasser emoting bluesy melodies backed by chromatic oddities from Milne. The quirkiest and most memorable track on the album, though, is a subversive take on the Sherman Brothers’ famed Disney tune It’s a Small World (After All), on which Glasser plays a breathy flute; following a pensive solo introduction, he proceeds to distort the child-like melody further and further, encouraging his bandmates to join in on its gradual destruction. The result is an at once amusing and profound meditation on the superficiality of mainstream American culture.

This album is a melting pot of styles and influences, demonstrating both Glasser’s mastery of the music of the past and his drive to traverse new sonic territory; as such, it succeeds without any political context. However, the saxophonist’s decision to theme his project, far from distracting from its musical content, actively enhances it by encouraging the listener to question his or her own beliefs and prejudices. Through a careful balance of humour and gritty musical truth-telling, Glasser has created something rare- a successful jazz concept album.