It may seem like light years have passed since live gigs were allowed but it was only just a year ago that lifelong friends Gonzalo Rubalcaba and Aymée Nuviola got together for a six-night sold out run at the Blue Note in Tokyo. Both originally from Havana, Cuba, they are acclaimed artists in their own right, but this collaboration together sounds as natural as can be. 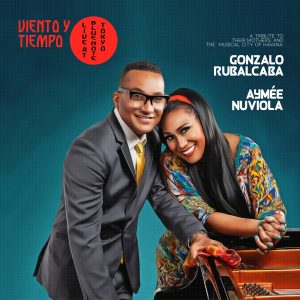 The gig starts with a Nuviola composition called Rumba Callejera (Street Rumba) and it settles everyone into their roles nicely, with lots of call and response between vocals and piano, and percussive improvisation breaks. Before long it falls into a groovy rhythm and sets the tone for the show.

These tunes seem to be standard latin jazz favourites, some from as far back as the 1930s as with the Moisés Simons song El Manisero (The Peanut Vendor). It’s a playful melody with a staccato sort of nature to it. But this is where Rubalcaba’s jazz chops shine through. After a conventional montuno, his solo steps out of the box harmonically and adds even more flavour to the music. His skill and ideas confirm his exceptional talent.

Kazuhiko Kondo plays a beautiful soprano solo over the only ballad on the album, El Ciego (The Blind). The lyrics share a list of metaphorical sad occurrences that happen, explaining the composer’s own despair. Nuviola performs this role as successfully as she does the fiery, latin diva, and the audience-engaging hostess. It’s nice to hear her bring the mood down and engage so eloquently.

Latin music always seems to celebrate collaboration: drums and percussion, piano and synthesizers, horns and voices; and this collection of songs is no exception. These musicians are like family — as though they’ve all just sat down for a traditional meal and everyone has brought their flavour (instrument) to the table, and of course it all just goes perfectly together.

Near the end of the night, Nuviola gets the audience participating in the pure fun of Bemba Colora (Red Lips). The bolero groove of Lagrimas Negras (Black Tears) is a nice variation to the clave rhythm that threads through the rest of the album, and the final title track, Viento Y Tiempo (Wind and Weather), is like dessert with a cherry on top. Imagine the Blue Note, with the chairs pushed back, and people salsa dancing in their spots!

For the band, this must be a very special memory to recall during such a difficult time in our world. If you need something to soothe your soul, look no further.