London-based singer and composer Brigitte Beraha’s new album is the first under her own name since Flying Dreams in 2008. Dreams are central to her vision here too – an entrancing and very beautiful mix of modern jazz, contemporary classical and improvised music. There’s an introspective, personal element, as the music – recorded live – seems to take the band and listener through different stages. 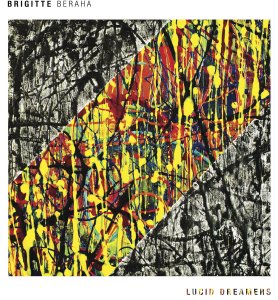 Breathy vocal musing opens the album, with Meaning of the Blues/Orderly Ruin. Beraha has recorded jazz standards before, and her treatments are always imaginative and distinctive. This version of Meaning of the Blues is a long way from Julie London’s cool delivery. The word “blue” appears out of distant, layered vocal harmonies and looped percussion. George Crowley’s gorgeous tenor sax whispers through layers of mist. Beraha admires Norma Winstone’s work with John Taylor, and the bubbling electronic sounds here recall Taylor’s minimalist organ in their 1970s Azimuth recordings. The sounds are all-encompassing and prepare you for the emotive lament of the lyrics.

“Blue was just a bluebird in a tree till he said forget me… Now too well I know the meaning of the blues.”

The song is deharmonised over a wash of pulsing choral sounds – the meaning, but not the style of the blues. The rest of the album has been written by Beraha, and the track’s second part changes mood, into the relentless chordal grooves of Orderly Ruin. Order brings destruction, as the dark chords grow more claustrophobic and reach turbulent intensity. The poetic lyrics and improvised vocals sound as if they’re struggling to escape. Tim Giles’ drumming is loosely powerful. Alcyona Mick’s freely-clustered piano notes are especially beautiful, as the music is “struggling to find purpose”, evading the control of the heavy chords.

The second piece, Disorderly Ruin, brings resolution as the vocal melody leaps and the sax weaves imaginatively round.

“I wonder if I detached myself from this chain of events

The lyrics break out into fragments of other languages as the whole band escapes into a euphoric beauty. Giles uses the whole kit as a percussive instrument; the piano sweeps in unexpected knots of notes, recalling Eve Risser at times. Mick is also a film composer, and she brings an impressionistic quality. The sax is serene over electronic waves and lapping cymbals.

Pandora’s Box seems to unleash not troubles but exciting phrases and textures, as strands of the tune fall apart into harmony. The groove builds with restless drums and piano notes curling round the edges of the melody. Lucid Dreamers has a luminous atmosphere that sent me back to Nono’s evocative sofferte onde serene, with its distant, mysterious piano. Gentle ululation blurs with Crowley’s sweet clarinet, strummed piano strings and brushes like sand on snare.

This feels like a European album, in the Winstone/Taylor tradition, using the voice as instrument, but moving further into free improvisation and contemporary classical influences. “It is all about discovery and the joy of the journey,” Beraha says. Close your eyes and let the music have its effect.