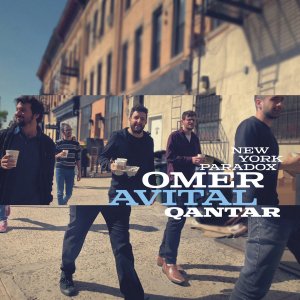 This is bassist Omer Avital‘s second release with his band Qantar. As he has stated , and as comes across well, it is a band which has found its ways of working and interacting: “Qantar has been working together for the past several years, travelling the world, rehearsing, and just as importantly, hanging hard. For this band, we don’t use charts but rather learn the music by heart and create the arrangements on the spot, organically. For me as composer/arranger this is the best way to work since you get the best results when the musicians can tailor their parts to the music …” This album is very heavily improvised and that is what makes it so exciting. From the first song Shabazi to the last Bushwick After Dark, it delivers a sense of superb musicality and tightness that can only be associated with a “family” who have an incredibly strong working relationship, built on complete trust and mutual respect.

The line-up sees Asaf Yuria on tenor and soprano saxophones, Alexander Levin on tenor saxophone, Eden Ladin on piano, Omer Avital on bass and Orfi Nehemaya on drums. These are all musicians who started their careers in Israel but have become fully immersed not only on the Israeli jazz scene but in New York as well. Avital is a natural bandleader, has been a fixture at Smalls Jazz Club for more than a decade, including a live album recorded in 2010 and it is fascinating to hear how he harnesses this experience in the recording, made at the studio/club/lounge which he has been running, Wilson Live! in Bushwick, Brooklyn.

Turning to musical style of the album, the tracks vary from upbeat modern jazz to more traditional sounding numbers. First, Shabazi introduces the full band complement with a funky groove and, despite lasting seven minutes, the song’s vibrant energy and catchy tune makes it seem shorter. The second, Zohar Smiles, lends itself to more traditional jazz, initially saxophone and piano and gradually joined by the rest of the band. The rest of the album is full of similar energy and enterprise.

Avital hoped to achieve an album organically developed; this is where he feels musicians are at their best. Upon listening to this little gem, they have surpassed all expectations. Omer Avital is a strong a composer who knows exactly what he is hoping to achieve and encourages the band to collectively and instinctively weave their musical tapestry to achieve this. Overall, a very fine album.