Solveig Slettahjell – “Come In From The Rain” 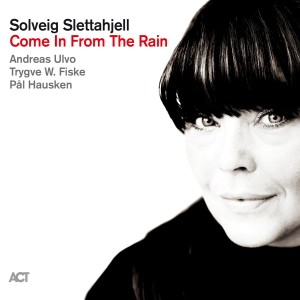 Norwegian singer Solveig Slettahjell has been on the scene for almost 20 years since she debuted with her band Slow Motion Orchestra. Since then, she’s garnered an impressive discography and most recently, she’s recorded Come in From the Rain with a new group of musicians.

The songs chosen for this album make an interesting collection. There are songs with quirky arrangements like the opening Come in From the Rain (originally written by Melissa Manchester and Carole Bayer Sager in 1975 and covered by Captain and Tennille) that holds way more weight and depth to it than the earlier versions both in arrangement and in her vocal delivery. It’s a bold way to start an album but it sucks the listener in on a journey that has only just begun. The following arrangement is even more twisted – the My Fair Lady song On the Street Where You Live is a fairly uninspired Broadway staple, but here, it’s turned on its head with an percussive uneasiness to it. Andreas Ulvo’s piano solo is short but develops the theme enough to actually bring back some of the traditional joyfulness into the song and by the end, it feels like this is how the song was originally written.

Since I Fell For You and I Lost My Sugar in Salt Lake City show off some impressive blues chops and you can really hear the smokiness in Slettahjell’s voice. It’s earthy and sweet sounding and she knows how to use it. The Billie Holiday classic Now or Never, is given a 60’s sort of mod-pop shuffle feel and the attitude seeps out of Slettahjell, especially during her scat solo.

In Slettahjell’s original song So I Borrow Your Smile, there is a tinge of sadness but the message is positive, like a prayer for anyone who needs it. She is a master at conveying message and meaning. The same goes for the Tom Waits song, the unbearably simple Johnsburg, Illinois here has such a beautiful intensity that it quickly becomes a favourite.

By the end of the album it is clear that this thread of intensity is driven by the trio; as though Slettahjell’s voice is food for their well-oiled machine. Pål Hausken on drums using different techniques interplaying with Trygve Waldem ar Fiske on bass, as they draw out the interesting aspects of each song and complement everything so perfectly. If this is an indication of what this new band can accomplish, let’s hope this is only the beginning of their collaboration.