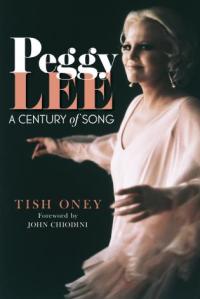 This is not intended to be a biography of Peggy Lee – we have three of those already, including one from the singer herself, and James Gavin’s splendidly bitchy Is That All There Is?: The Strange Life of Peggy Lee. As its title suggests, A Century of Song marks 100 years since the birth of the former Norma Delores Egstrom in Jamestown, North Dakota. Rather than retell the story of her life, the book aims to focus on her “musical footprint and artistic legacy”, outlining her development as a singer from restless teenage ingénue to formidable grande dame.

Peggy Lee is rightly admired for the beauty of the vocal instrument she was born with, and for the interpretive skills she honed over the course of her 65-year career. She was an innovator, too. Early on, she learned the secret that Bing Crosby had already discovered: the art of the microphone. Once their voices could be amplified, singers didn’t need to bawl, shout or bellow to make themselves heard over the band. They could sing expressively, even intimately, and still be audible. Lee pushed this further than Crosby. In 1939, confronted with a noisy crowd at a venue in Palm Springs, she decided not to up the ante, but to sing more quietly instead. The more racket the audience made, the more softly she sang, until finally they noticed her, quietened down and began to listen. It was a formative moment. “I had learned how to reach and hold my audience – softly, with feeling.”

As with the microphone, so with the new medium of television: she quickly learned to lock on to the camera with an unwavering gaze that almost dared the audience to look away. It gave Peggy Lee’s TV performances extraordinary power, and they captivated many jazz singers who came after, notably the young Mark Murphy, who also clocked her technique of singing a line conversationally, just as she might have spoken it. Rather than belt out the tunes in the brash, showboating manner of Barbra Streisand or Shirley Bassey, she sang low and husky. This worked perfectly for ballads and blues, as one might expect, but it also imparted a new, sophisticated flavour to swing. She often sang out of time, and did it brilliantly, because her rhythmic sense was rock solid; yet such was her control and relaxed delivery that you barely even noticed.

So there was always a book to be written about Peggy Lee’s contribution to vocal jazz, but I’m not convinced that A Century of Song is it. Based on author Tish Oney’s doctoral dissertation, and with the guidance of no fewer than three editors, the book could have done with more thorough revision before being unveiled to the public. Oney has some insights to share, referring to the singer’s technical mastery of improvisation, dynamics, phrasing, rubato, vibrato, smears, scoops, the blues scale, and so on. She credits Lee, with some justice, as a pioneer of the “easy listening” genre, and points out that her work as a songwriter and lyricist is often overlooked. But A Century of Song has failed to shake off the dust of the lecture theatre. Instead of using her research selectively, Oney regurgitates most it undigested as she plods dutifully through Peggy Lee’s professional history rather in the manner of the conventional biography it was not supposed to be. Oney tries to document everything she did, with the result that at times the book becomes a parade of chart placings, track listings and personnel. Homing in on a limited number of key recordings in greater detail might have worked better.

There are some good moments: Oney describes Peggy Lee’s performance of You Go to My Head as “like a drunkard, slowly shuffling her way to the door of a tavern following an evening of overindulgence”. But too often the text is descriptive rather than analytical or evaluative, and the writing is stiff and clunky, sometimes to the point of incoherence: speaking of Peggy’s work on the theme song to the film Johnny Trouble, Oney writes: “Since so much film produced prior to 1960 was not archived in ways to ensure perpetuity, much was subject to deterioration.” And one of those three editors should surely have noticed that whatever the “exotic flavour” of the samba, it sure ain’t “Spanish.”

LINK: Peggy Lee: A Century of Song at Rowman and Littlefield