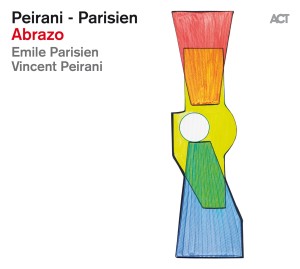 Abrazo is a tango dancer’s embrace and also a hug, according to French accordionist Vincent Peirani. He’s been working in a duo with compatriot soprano saxophonist Émile Parisien since 2009. Both have won multiple awards with their varied projects, and this is their first recording as a duo since Belle Époque – their 2014 take on the Bechet era. Abrazo is a study in tango, with tunes written by some of the great tango composers, as well as by the duo themselves

Jelly Roll Morton referred to the “Spanish tinge” in his tune The Crave, which blends ragtime with tango – the duo make the tune’s “tinge” even stronger. Parisien’s tone is distinctive from the first note- he admires Wayne Shorter, but has a plaintive Balkan timbre too at times, like a kaval. Xavier Cugat, “le roi de la rumba”, wrote classic tangos, and Charlie Chaplin reputedly learned to dance to his band. Peirani and Parisien managed to track down Cugat’s Temptation to a 30s film, and their version keeps the spirit of the dance. Peirani as always thinks orchestrally: he knows when to play more rhythmic chords, or emphatic lines that delineate the harmony, and even bends notes. Dramatic pauses are the musical equivalent of a rose between the teeth as Parisien breaks into wild Ornette Coleman-ish improvisations.

Peirani’s Between T’s (T for Tango?) intervenes between two Piazzolla pieces. In Fuga Y Mysterio the two instruments dance round each other with delicate speed. The original’s orchestral energy is all there, not least in the percussive buttons and faint whoosh of the accordion, which sounds like a living being. The sax swirls intensely with ferocity and humour. Between T’s, for solo accordion, opens pensively as jazz chords unfold into the fabric of the melody. Deus Xango has a jazz pedigree, with recordings by Gerry Mulligan and Joachim Kuhn among others. Parisien and Peirani keep the vital elements of the original, propelled by the accordion grooves and leaping notes; the sax solo sounds like free jazz at times, but keeps the spirited intensity of the rhythm.

A Bebernos Los Vientos is by Argentinian-born guitarist Tomás Gubitsch, and Peirani has already recorded one of his tunes with Michael Wollny. It’s a complex composition, with fluttering dance sections, vehement improvisation and calm moments when the winds drop. Notes sally back and forth as the sax keens over tense accordion rhythms and stalking bass lines.

Peirani has contributed two more pieces: Nouchka (“the nickname of my wife when she was a little girl”) and F.T. (aka Funky Tango.) The first is playful with a minor gypsy feel, with a never-ending range of counter-rhythms and lines. The accordion solo section layers phrases like Bach- Peirani has transcribed a great deal of classical music for accordion. Parisien’s solo takes its time with serene arabesques en pointe. In F.T., the duo hurl pieces of the blues at each other- it’s like play-fighting, but everything fits together brilliantly.

The melody of Kate Bush’s Army Dreamers is pared to its folk-influenced essentials and becomes a tango waltz. The sax plays beautifully against the beat and the end is unresolved, as if they’re dancing off into the wings. Perhaps Parisien’s haunting Memento has the strongest link with dance- it’s been interpreted by Alice Renavand and Fred Faula (VIDEO) in a powerful mix of modern dance and tango, as they express the music’s emotional nuances.

This recording is full of extraordinary skill, drama, fun and joie de vivre – it should be prescribed for happiness deficiency.