Diana Krall – “This Dream Of You” 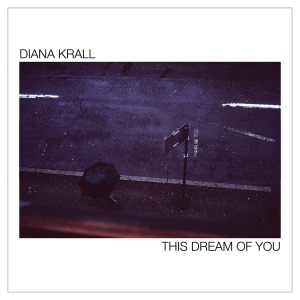 Diana Krall has made some truly great albums during a stellar career, but this isn’t likely to be one of them. The majority of the tracks were culled from sessions for her 2017 album Turn Up The Quiet, for whatever reason not quite making the cut or left uncompleted. Nothing unusual in that, many albums are put together in this way. But this is a major artist signed to the biggest record label who has sold over 15 million albums, and one naturally expects more than reheated leftovers, even though this artist has the skill to whip them into a feast. So, is this a stopgap release forced by the pandemic, a label obligation, or the result of a creative vacuum caused by the loss of her longtime producer, the irreplaceable Tommy LiPuma, who passed away in March 2017?

Krall has lost the support of the man of whom the singer and pianist Ben Sidran said in his book The Ballad of Tommy LiPuma: ‘He not only knew how to make great records, he also knew why. He heard inside the music for the human component. A recording wasn’t merely an artifact, it was a snapshot of the soul of a person and a song at a magic moment.’ Although the album credits read ‘all songs produced by Diana Krall and Tommy LiPuma (2016-2017)’, Krall takes the album production (2020) and sequencing credits with only a recording/mixing credit for the master engineer/producer Al Schmitt, who has been part of Krall’s team for just as long as LiPuma.

So if this is indeed ‘’Turn Up The Quiet Vol. 2’, is that such a bad thing? That was a successful album on all fronts, artistically as well as commercially. And here again, the repertoire is all top of the tree, Bob Dylan’s title track and eleven standards that are part of the fabric of 20th Century music. But on first listening to this album I was disappointed, as the tracks played through there was a growing feeling that a number of performances were falling short of the extremely high bar Krall had previously soared over.

Over subsequent plays I began to warm more to it, but overall there’s still a missing spark. But the album’s highlights stand out: More Than You Know with Alan Broadbent on piano is lovely. Just You Just Me swings like crazy and lights a fire under the vocal, the only time Krall sounds like she’s singing with a smile on her face. Currently released single, I Wished On The Moon, a duet with double bassist John Clayton, is a little loose but has a great feel in the style of Ray Brown and Jimmy Rowles. But Beautiful is just that, and Anthony Wilson’s guitar solo over Alan Broadbent’s string arrangement is jaw-dropping.

If you like Diana Krall (and you should, because she is a great artist) and enjoyed her last album, I hope you will enjoy this too.

On a sad note, among a short list of the recently departed in the CD credits –  Jo Andres, Hal Willner and Johnny Mandel – is the name Mary Ann Topper. She was the larger-than-life artist manager who was the driving force in Diana Krall’s development to becoming a major jazz star.

LINK: Pre-order and preview the album