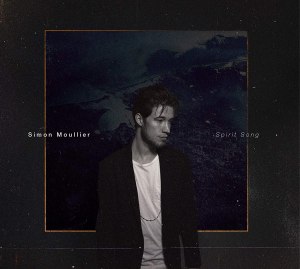 The vibes can deliver near-endless sustain for melting balladry or emphasise the staccato impact of mallets on aluminium. The impressive Simon Moullier trained as a classical percussionist in his native France and mainly leans toward the latter. His first recording as leader showcases a player who loves to pick up high velocity, but is also a gifted inventor of melodies and a crafty builder of settings for his chosen instrument’s distinctive qualities.

The nine pieces here are assembled from sessions caught over the last few years, with a shifting cast but featuring Luca Alemanno on bass and Jongkuk Kim on drums throughout. Saxophone lines come from Morgan Guerin on tracks laid down in 2017 – including some furiously paced solo exchanges with Moullier on the title track – and Dayna Stevens, impressive on two cuts they managed to lay down in Brooklyn in May this year. Piano duties similarly transfer, from fellow French artist Simon Chivallon to Isaac Wilson.

All the composition’s are Moullier’s aside from a gentle rendition of I’ll Remember April, and include interesting explorations of rhythmic patterns and, here and there, synth atmospherics, as well as more conventional jazz treatments of beguiling tunes. A solo piece, Prophecy, is a dreamy meditation for the vibes with subtle synth ornamentation. The closer, Bala, strips everything back to show off Moullier’s bouncing balafon line.

Otherwise, the music has a fairly dense texture and the production generally a high sheen that brings it out well. Drummer Kim is habitually busy in the manner of, say, Antonio Sanchez, but is mostly well back in the soundscape so avoids overwhelming the leader (this band would be a real challenge to mix live). The pianists and Moullier work hard to avoid the too-many-notes-in-the-same-aural-space hazards that inevitably go with combining their instruments, and manage it most if not quite all the time. There’s a lot of detail in the shifting prominence of the instruments on every track, subtleties that create seamless flow rather than grand declarations that grab the attention – this is rewarding composing and arranging as well as fearsomely accomplished playing.

Coincidentally, the last recording I reviewed here was from a classical-leaning Frenchman now in the US, drummer Raphaël Pannier. Is there a trend here? It is certainly easy to imagine Pannier and Moullier making great music together one day. Meanwhile, here’s another excellent debut from a virtuoso with a firm grasp of what he wants his ensemble to do.