Still in his early twenties, New York-based multi-instrumentalist Morgan Guerin is rapidly establishing his presence on the scene, playing in the bands of Terri Lyne Carrington, Kassa Overall, Tyshawn Sorey and Esperanza Spalding. His third self-released album completes a trilogy started in 2016; it features Guerin on saxophones, keyboards, bass and drums, amongst others. Interview by Alex Hitchcock:

You grew up in a musical family just outside New Orleans; how did that shape your musicianship from an early age?

I’m very fortunate to have such a supportive and musically diverse family. Growing up, it was so cool because we’d always have family jam sessions at my grandmother’s house. She is the person who initially taught me how to play drums and bass. She’d teach me Zydeco, Blues, Soul and Funk basslines and drum grooves and we would practise every day I was at her house. Eventually moving to Atlanta had a big part to do with the shape of my musicianship as well. I feel like I started to branch out and figure out the production and engineering side of things during middle school/high school.

How have you managed your time in developing such a broad skill set? Do playing/writing/mixing/producing go hand in hand, or have you consciously worked on them separately?

I have worked on them separately a ton, though they’re all related to me when I’m working on something. I’m constantly curious about how to get better at these crafts. I’m often reading, listening, and researching a bunch, but a huge chunk of it is just taking risks, trying things out, and trusting yourself.

How do you approach multi-instrumentalism – are you always thinking in similar ways on drums/bass/sax, or are you able to express different things on different instruments? Do you write on a particular instrument?

I try to respect all of the usual roles of each instrument, but I’m also thinking about how I can maintain a sense of personality that’s specific to me on all of the instruments that I play. At this point, I feel like I’m able to express whatever I want to hear and if that’s immediately not the case, I know what I need to do to get there. I don’t write on any instrument in particular, but I usually tend to gravitate to whichever instrument I’m least familiar with and begin writing there.

What’s the inspiration behind the title of this series of albums, The Saga? Did you always intend for it to be in three parts?

The three records are essentially my audio autobiography from a very little kid to now at age 22. The album covers are supposed to portray what was going on in my life at that time, and the physical and musical growth. I didn’t always intend for this to be three parts, but I decided after releasing “The Saga II” that I felt like I needed to make a third saga to complete the story of my life before age 21. 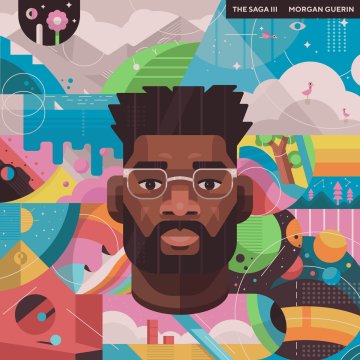 Could you talk about the third album’s influences in terms of composition and production?

Influences range from Wayne Shorter, Georgia Anne Muldrow, Bon Iver, Meshell Ndegeocello, Flying Lotus and many more. Though, in general I sometimes would try and not listen to music for periods, just so that I could figure out what I was trying to achieve on my own while working on this project. But those individuals, as well as the people I was playing with, were huge influences in the way that I thought about composition and production during that time, and still to this day.

Aside from working with amazing collaborators on all three albums – has the composition/recording process been solitary or are you often running demos past people, or testing the music out on live shows?

Surprisingly, all of the music on this last record has been performed at least once (mostly in an acoustic setting), unlike the music from my previous two records. I’d say that my composing and recording process is pretty solitary, though some of the songs grew as a result of playing them live.

How did you choose who to feature on this album? What makes you ask a guest on, say, drums when you yourself play that instrument?

I chose the artists based on my personal relationship with them. Safa and I went to college together, Débo [Ray] and I both play with Terri Lyne, and Zacchae’us [Paul] and I grew up together in Atlanta. JK [Kim] and Chris [Fishman] are two of my closest friends and we play a lot together. JK’s style of drumming and his approach on my songs led me to ask him to play on my record. As a drummer myself, there are tons of things that JK plays that I just love to hear. I’d rather him play than myself try and mimic things that he easily plays.

What would the live gig for this album look like?

It would hopefully represent all the sonic elements of the record and more! I would ideally love to include visuals and otherworldly elements in the live show to connect and enhance the senses. It would also be cool to play multiple instruments throughout the live show as well. It’s been something that I’ve been thinking about and look forward to figuring out once we’re able to tour and play more live shows.

What have you learned from playing in the bands of experienced musicians such as Terri Lyne Carrington, Esperanza Spalding, and Tyshawn Sorey?

Those three musicians in particular have some of the most inspiring work ethics. I’ve been lucky to witness their greatness at close proximity these past few years. Terri Lyne taught me so much about how to play bass with a drummer and how to be mindful and intentional with the choices that I made on the bandstand. Esperanza has introduced me to a whole new way of thinking about music and my approach to these instruments and composition. Tyshawn has taught me how to be patient and precise with my intentions and how to survive in the deep end while being musically uncomfortable. Playing with these three musicians especially has drastically shaped the musician that I am today.

What motivates you as a musician? Do musicians have a special role in polarised or dysfunctional societies?

My family has been my main motivator pretty much all of my life. The work ethics of the individuals above also motivate me to strive. Musicians and artists in general have extremely important roles in these societies because we bridge the gap. Music and Art encourage introspection and allow us to have our voices heard and preserved.

What are your future plans? The recent Roulette commission for large ensemble has some amazing musicians on it!

I plan to continue producing, mixing, engineering, composing and performing throughout my life. I also plan to continue to write more large ensemble pieces like the Roulette commission, expanding that to orchestras, and would eventually love to branch into the film score world someday. I want to have a long, diverse catalogue of music that I make and am involved in.