In normal circumstances, saxophonist John Butcher would be working as improviser and composer, exploring feedback, unusual acoustics and non-concert locations. But his last live performance was on 15 March 2020, and as his website says: “In the absence of concerts – apologies that most of the news is about recordings.” But there are a lot of them:

– There is a series of download-only releases “The Memory of Live Music”. They are listed HERE

– His trio with John Edwards and Mark Sanders, known as Last Dream of the Morning has a second album out, Crucial Anatomy. In fact his last live performance was the launch of that album at Cafe Oto

– And there are other examples of what Butcher calls his ‘ever-mutating collaborations’ currently on hold, for example work in a trio with pianist Matthew Shipp and synthesiser player Thomas Lehn

– An album, We met – and then, with Barre Phillips and Ståle Liavik Solberg is due for release in early 2021

– A major project, a series of 5 LPs, recordings of live sessions at the Ausland Club in Berlin, is due on the Ni Vu Ni Connu label

– A large ensemble commission from the Huddersfield Festival is on hold until November 2021.

LJN’s colleagues and friends Citizen Jazz have just published an interview with John Butcher, and we are co-publishing it in this English version: 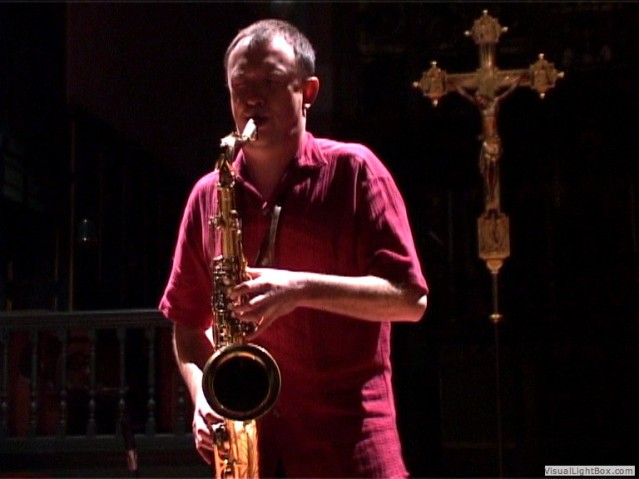 How did you first get involved with music?

At school I had piano lessons. At 18 I worked nights in Tip-Top Bakeries to pay for a tenor saxophone and then learnt to play it by working in bands; wind bands, big bands, dance companies, an avant-rock group, jazz (standards and free-er) combos. By the early 80s my playing interests had coalesced around free improvisation. That decade contained a lot of experimenting and playing in rooms above pubs. A very creative time, but it would be stretching it to call it a career.

Then, people hear you, some of them like what you do, some of them are musicians who invite you to do a concert, sometimes it works, groupings form and eventually you find yourself travelling the world to play with some extraordinary people. It feels particularly poignant to say that in this time of pandemic.

You started your career as a musician quite late, after studying physics to post-doctoral level. Does that affect your artistic vision or approach to music?

I think physics and music satisfy different needs, although I value the exploratory aspect of both. They both involve trying to get to what’s hidden around the corner.

A big difference, though, is that with music you can try to create your own world – whilst with physics you need to agree with the one that already seems to exist.

You play with musicians from Belgium, Germany, Portugal. Do you see any unifying features in European improvised music?

It’s almost a paradox, although I think it’s a strength, that musicians with an interest in collaborative improvisation are generally strong-willed individuals with quite unique musical personalities. Country, culture, generation, race and gender all bring other layers of variation to this. So what unity there is must lie in the shared desire to try to make collective, spontaneous music. But one that allows for your own music and history to enter.

I played in a Derek Bailey Company Week in 1992, and found myself meeting, on stage, for the first time in a trio with Reggie Workman and Jin Hi Kim (komungo). I thought “how’s this going to work?” – but it did, and I believe it shows both the mystery and the value of this method, even this way of life.

And you also play with Japanese, and Canadians from the Grand Groupe Régional d’Improvisation Libérée (GGRIL). What’s the story there?

Regarding GGRIL, I was invited to compose a piece for them – about 20 players, based in Rimouski, a small town in French speaking Quebec. It utilised improvisation, but I prefer large groups to have some imposed structure or plans, and I like to make pieces that are to do with the players, not the instruments. I had to work fast, composing as I got to know them musically. I did something similar in Mexico City with the CEPRO group. It’s tricky when everyone speaks another language. Often in Japan I manage little verbal communication with my playing partners, so everything is negotiated through sound in performance.

You are also close to a particular part of the American scene, notably with Joe McPhee, Fred Lonberg-Holm and Matthew Shipp, the latter with whom you recently recorded The Clawed Stone. Do you still see differences and similarities between the American scene and Europe?

Actually, the American I’ve worked with the most is percussionist-plus-plus Gino Robair, from San Francisco. It’s hard to talk about an “American” scene as there’s already a big contrast between, say, the West Coast, Chicago and New York. I find a more experimental attitude on the West Coast, for instance. Overall I prefer to think in terms of individual players. All those you mention are fantastic to collaborate with and their creative distinctiveness is more noticeable than their similarity as Americans.

With Last Dream of The Morning, you are in an ensemble of players from the UK (John Edwards on double bass, Mark Sanders on percussion). You played with Phil Minton and Fred Frith. How do you see the UK scene?

It’s very do-it-yourself. There’s never been much money around, so people make their own possibilities and I like to think that the creativity rather than the business comes first. Financially it can be hard to survive as a musician in London, but this makes you realise that the music must mostly be its own reward – otherwise you’d give up.

Recently, Café Oto has had a very positive effect with its support for marginal musics.

Your powerful playing, quite physical, is quickly recognisable; you’ve played with punchers like Thurston Moore, Joe McPhee, Keiji Haino or Otomo Yoshihide; and you also like duets. Is the balance of power important in your creativity?

It’s 35 years since my first LP, and I’d say that a lot of my music has been at the “chamber” end of the scale. But I like to hear the personality of the musician on the end of their instrument and some players (and all those you mention) have a BIG dynamic range. About 20 years ago I started working with guitarist Andy Moor (of the EX) and he needs a certain amount of power to get his particular sound. I developed ways of playing with those kinds of energies without, I hope, falling back on too many of the high-energy sax clichés.

Moreover, from Mark Sanders to Gerry Hemingway, you enjoy working with inventive percussionists, while keeping the same energy…

I’d like to add Ståle Liavik Solberg and Paul Lovens to your list… I’m sure wind and percussion combinations go back thousands of years. It feels so elemental and I love percussionists who think timbrally and tonally alongside the rhythmic sense. Everything from giant sound masses to interwoven filigrees is possible.

What are your major influences?

The most influence comes from the people I choose to play with. I guess at any one time there’s a changing group of about 50 people round the globe I value working with, and get the chance to do so every few years. New contacts are made and some fade away, but it’s this flux that keeps the music-making fresh and alive.

A list of music and musicians I like might show a different angle on influences, but it would be very long and probably rather incoherent. This week I’ve particularly enjoyed hearing Lester Young, Iannis Xenakis, Roza Eskenazi, Annea Lockwood, Albert Ayler, Rhodri Davies, Blind Willie Johnson and Archie Shepp.

Who would you like to record with that you haven’t crossed paths with yet?

Future recording wishes – hmm – duos with Keith Rowe, Okkyung Lee and Louis Moholo to name three. I’ve a head full of groups I want to play concerts with – let’s see when the world will allow it.