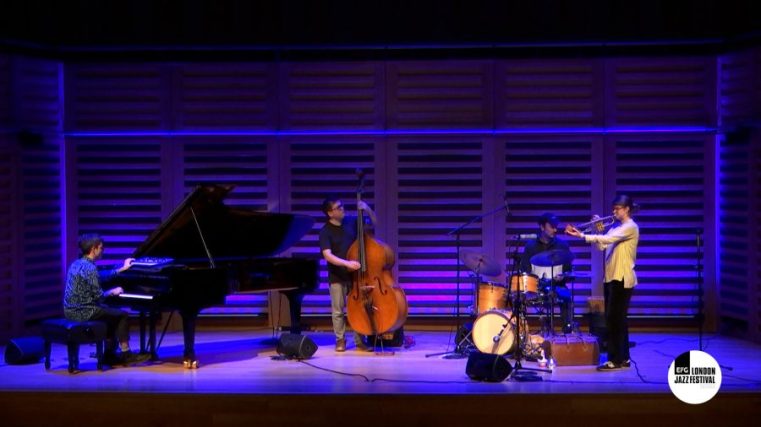 As an emergency new medium, the online-only gig has yet to reach perfection. When Dinosaur ended this clever, playful and supremely skilful show, the closing notes of For One were greeted by blank silence. I mean, couldn’t at least the camera team have clapped, or whistled for a well-deserved encore? Perhaps, like the Premier League, viewers should be able to press the red button and hear customised crowd noise (Go Dinosaur! etc.).

Also, technical problems delayed the start with some would-be viewers stymied by a blank screen – and presumably switching to the Ronnie Scott’s documentary that awkwardly coincided on BBC Four. Still, for those who kept faith, the reward was a bravura display by the four-piece group giving their album To the Earth, released in May, a belated live showcase.

Laura Jurd is a remarkable trumpeter and composer. Over a ten-year span, her Mercury-nominated band has reinvigorated Seventies jazz-rock, toyed with Eighties synth pop and now, on To the Earth, created playful, original, largely acoustic jazz that manages to sound thoroughly original while tipping its hat to jazz history. The obvious example is the lone cover, Billy Strayhorn’s Absinthe, its languid melody played with woozy style and featuring a section when Elliot Galvin played lines on both piano and mini-synth before his solo blossomed into a brief burst of classical grandeur. Elsewhere, there were hints of Thelonious Monk-like discordance in Slow Loris as the song grew in live interpretation, a mix of jauntiness and menace, over the steady lope of Conor Chaplin‘s double bass.

While Jurd can play with a Miles-like lyricism, her sound here often echoed an earlier era, recalling Lester Bowie. Her muted lines were interspersed with slurs, growls and marching band sonorities before darting off on unexpected tangents. There was plenty of intricate dialogue with Galvin, a pianist whose soundworld spans contemporary classical to the blues and who can swing too. Motifs were sometimes picked out in frenetic keyboard and trumpet unison before the explorations began, underpinned by the creative drumming of Corrie Dick. Always a couple of strokes away from the obvious, his sound was augmented from a wicker basket full of irregular percussion – an empty tin can had an intermittent starring role. Rather than leader and backing band, this ensemble of former Trinity Laban students contains four strong voices each happy to come forward.

After the funky strut and fierce soloing of Banning Street Blues, the pensive For One with its shades of gospel and the blues was a slightly downbeat ending to a vibrant show. Still, I’d have cranked up the canned applause. Dinosaur music edges into the unknown without losing its bearings while also honouring the past. That’s quite a feat.