Gabriel Latchin has a track which has reached nine million plays on Spotify. After the success of a Christmas concert last year,  the  pianist, who has rapidly become a fixture on the London scene, has recorded a festive album with his trio – but there’s more to the arrangements than first meets the ear, as John Bungey discovers: 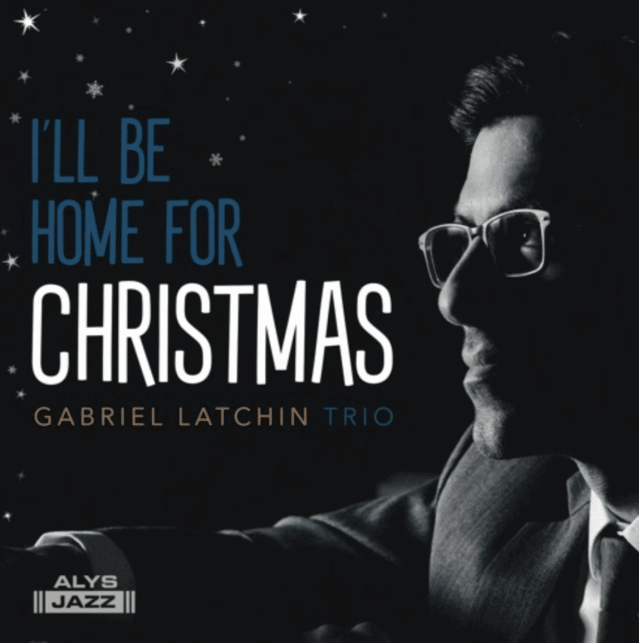 There’s an added poignancy this year to the title song of Gabriel Latchin‘s seasonal album, I’ll Be Home For Christmas. In Covid times, we will, of course, all be home for Christmas… no sipping gluhwein in an Alpine ski chalet, no basking on a Bali beach for Brits on December 25. In any event, the 11 songs on the third album by the London-born pianist and his trio will make good company for you and your bubble, augmented perhaps by a roaring fire and a favourite tipple or two.

Latchin, whose CV includes work with artists from Christian McBride to Claire Martin, serves up the seasonal classics: Winter Wonderland, White Christmas, Chestnuts Roasting On An Open Fire… but this is no mood music cash-in. His interpretations are intensely melodic and upbeat but listen a little closer and a whole history of jazz is revealed. The link between Thelonious Monk’s Blue Monk and Santa Claus is Comin’ to Town? You’ll hear it here first.

Latchin explains: “I did a Christmas show last year [at Pizza Express in Soho] and everyone seemed to enjoy it so much. People asked me if I had recorded these songs. It was a reminder that jazz musicians can be very snobby in terms of what they play – whereas most people know what they like.

As Latchin rehearsed a further idea emerged – how would the great pianists of jazz sound playing these tunes? Latchin’s beautifully melancholic I’ll be Home for Christmas “is definitely me doing my best Bill Evans impression. I really wanted to channel his ballad-playing.

“Monk peeps in and out. Winter Wonderland is a love child of Monk and Ahmad Jamal … On God Rest Ye Merry Gentlemen I was trying to go for an early Herbie Hancock thing, especially in the solo section.”

Soon links were presenting themselves. “Take the openings of Blue Monk and Santa Claus is Comin’ to Town – one’s a diatonic scale whereas Monk is chromatic. Same thing, same notes, same starting point. You know what, maybe even Monk thought of that himself.”

For Latchin and his long-standing rhythm section of Josh Morrison, drums, and Dario Di Lecce, bass, the project was a focus in the midst of the Covid doldrums. Latchin has some teaching and a hotel gig. He counts himself lucky that the trio’s recording of Polka Dots and Moonbeams made it onto a Spotify playlist and has been streamed almost nine million times. Even by Spotify’s famously niggardly standards that’s a revenue stream in lean times.

“It’s not enough to buy a five-bedroom house in Knightsbridge, which is my aim,” he says with a chuckle. He lives with his wife and three children in the Surrey Hills and like any jazz musician this year Latchin wonders how long the hiatus will last. In gloomier moments he has wondered about other paths. He has a first-class degree in economics from Edinburgh University – “I don’t know if that’s obsolete” – which he attended before the Guildhall School of Music. But he’s an exceptional pianist (the Guildhall awarded a first too) in the mainstream Oscar Peterson tradition. The great bassist Christian McBride calls him “an excellent musician and one hell of a nice guy”. There have been rave reviews from as far afield as Japan. No other career, he suspects, would replace the buzz of performing. “It just feels so good, even if it’s just you and some friends playing.”

Latchin is 36 and has said before that he would like to make five albums before he is 40 – so two to go. “The key is to hurry up. I really dragged out the first one. It’s getting easier, every step is faster; you know what to do.”

As a child, he was never hot-housed and did not grow up in a jazz-obsessed family. He adds with a smile: “There was a kid in my school – I looked him up the other day, he’s now a cardiologist – he corrupted me because he taught me the blues scale when I was quite young. I didn’t know what it was. It was just a bunch of notes but I could play it in a certain way and it sounded satisfying. I noodled around with it for a while and never got bored with it – and I’m still not bored with it.”

I’ll Be Home for Christmas is released on December 4 (Alys Jazz); he appears at the Chapel Arts Centre, Bath, on 11 December (Bookings)

Link to pre-order the album in time for Christmas