Peter Jones – ‘This is Bop: Jon Hendricks and the Art of Vocal Jazz’

By rosasawer on 22 November 2020 • ( Leave a comment )
This is Bop: Jon Hendricks and the Art of Vocal Jazz. Peter Jones 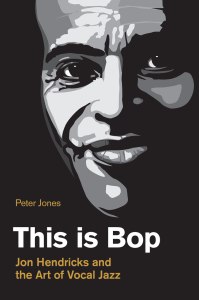 Musician/writer Ben Sidran calls jazz singer/lyricist Jon Hendricks a ‘generous spirit [who] radiated love and affection for the music and the people who made it.’ Drummer Andy Watson remembers him simply as ‘a scream to be around.’ Leonard Feather summed him up as ‘an incurably happy man [with] a congenial, non-neurotic approach to music.’ He is also celebrated as a deeply serious musician, steeped in the jazz tradition; when he died (in 2017, aged 96), broadcaster Claude Carrière commented: ‘It’s like a museum burned down.’

Exuberance, vitality, witty verbosity, innate musicality: Hendricks exploited these natural gifts throughout an eight-decade career that took him from performing (at 14) as an opening act for the likes of Louis Armstrong, Count Basie and Duke Ellington at Toledo’s Waiters and Bellmen’s Club to a peak of popularity with the vocalese trio Lambert, Hendricks & Ross, and subsequently to a gruelling but lucrative life as a performer worldwide in family-based groups. For all his apparently straightforward ingenuousness, however, Hendricks emerges from this admirably clear-sighted biography as a somewhat ambiguous figure; ‘a strange mixture of hipster and preacher’ is how Manhattan Transfer’s Janis Siegel sums him up. He leaves California for the UK because he finds the West Coast life too lax and liberal for his taste; he has a distressing habit of underpaying his sidemen, occasionally even misleading them about his own fee to encourage them to accept a cut rate for recording sessions and live performances; Annie Ross claims he exploited her heroin addiction to cheat her out of her royalties for ‘Twisted’; he stymies a projected recording and subsequent tour with Van Morrison by suddenly demanding cash payment up front.

Despite all these faults, though, Hendricks achieves legendary status in the jazz world, fêted and respected wherever he goes by the likes of Wynton Marsalis, Mark Murphy and Bobby McFerrin, gigging everywhere from Ronnie Scott’s to Carnegie Hall, given an honorary doctorate and a teaching position by the University of Toledo in his late seventies. His final year is marked by the performance of his masterwork, a vocal version of the Miles Davis/Gil Evans album Miles Ahead at St Peter’s Church in midtown Manhattan.

Peter Jones chronicles all this with unflinching clarity, so Hendricks is seen in the round, as it were, all his extravagant talent on view alongside his intensely human foibles and weaknesses. The resulting biography thus provides not only a fascinating survey of a career spanning the golden age of jazz, but also an intriguing study of a complex, many-layered character.

LINKS: This is Bop: Jon Hendricks and the Art of Vocal Jazz is available to buy here

Interview with Peter Jones about this book