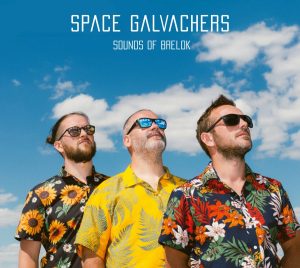 Stanislav Augris’ cheerful album cover pic of Space Galvachers, dressed in snazzy holiday shirts and shades as they stare into the blue beyond, portrays them as the funster adventurers their ‘out there’ debut album Sounds of Brelok confirms they indeed are.

According to the French jazz trio’s Bandcamp page Sounds of Brelok is “a fantasized space quest… a chimerical sidereal odyssey…” and to be sure, this playful romp of a concept album is nothing if not quirky. The trio’s cellist Clément Petit helpfully explained by email the meaning of the band’s name. A ‘galvacher’ was in past times a travelling carter from the French region of Burgundy, referencing not just the band’s peripatetic musical style but also the fact that all three of the trio hail from that region.

Petit also shared that ‘Brelok’ (breloque) translates as ‘trinket’, as the trio believe elements of their music, often played on ‘prepared’ instruments, sound trinket-like. Furthermore, it was pointed out by someone with greater facility in French than this humble writer, that the expression “batter la breloque” translates as “to go mad”. Yet more word-play is at work in track names such as Fractal Coconuts and Rat Soleil, some tracks referencing specific astronomical entities (Scuti Sun Burn, Foire à Westerlund – look them up!). However, whilst refreshingly unconventional, this album boldly goes way beyond mere whimsy.

Space Galvachers has an unusual instrument complement with Petit’s cello being joined by Clément Janinet on violin and Benjamin Flament on percussion. Though this is their debut recording as Space Galvachers, all three are established musicians in France, having over the last decade collaborated with each other on a wide range of projects, as well as with names such as Han Bennink and Richard Bona (Janinet) and Oumou Sangaré and Angélique Kidjo (Petit).

As for percussionist Flamant, whose company Green Lab has produced the album, he has worked with jazz statesmen such as Peter Brötzmann and Théo Céccaldi. His percussive research has reportedly led to his forging a metal percussion set, which surely features on this album. The musicians’ combined wide range thus takes in jazz, world music, improvisation and electronics, all of which can be heard here.

Sounds of Brelok feels as though improvised by a closely attuned trio. Repetitive motifs call to mind both Steve Reich and some club music genres, such as in the track Fractal Coconuts. Slivers of melody arise, often pizzicato on Janinet’s violin, while various world music styles manifest then subside, such as the flamenco-like opening in Balastral, hoarse strings evoking Ali Farka Touré in Quadrille Aux Etoiles or the Arabic quality in Scuti Sun Burn. A very free, highly rhythmic and textural jazz sense is present throughout – listen for the fab, driving drumming and top interplay between instruments on Balustral, for example.

Portentous electronic glowering – indeed, an array of electronic echoes, parps and glugs are used throughout the album – supports changes in mood and, together with the extended techniques, conduce an off-kilter, sidereal effect.

Though some tunes feel a bit brief, in live performance these will doubtless be developed, every track being spacious enough for extended improvisation.

Plaudits are also deserved for Ronan Fouquet (recording), Adrian Bourget (mixing), Raphaël Jonin (mastering) and Clément Aubry (graphics), whose important contributions seal an album that is as playful, cheering and singular as you could wish for.

Sounds of Brelok was released on 1 November 2020 and is available from Green Lab Records on CD and Download.