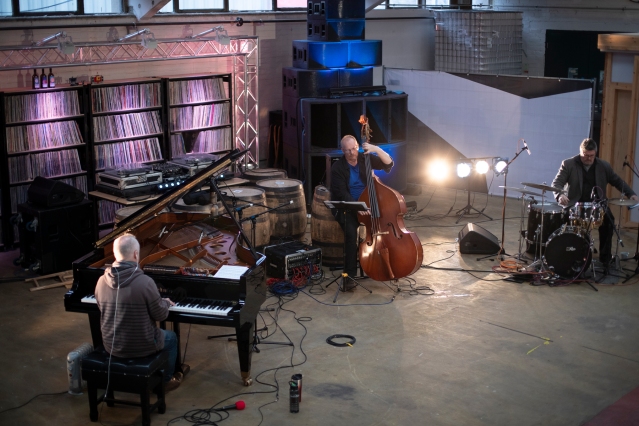 The Edinburgh Jazz & Blues Festival brought a bit of light into the dark winter by streaming a series of shows over their Scottish Jazz & Blues Weekend. Filmed in advance in a socially distanced community space, they certainly brought a suitable fix to those of us missing live shows.

The members of The Dave Milligan Trio have been busy since the lockdown hit in March: Tom Bancroft as been part of the Playtime team has been producing weekly, socially distanced gigs, streamed over the internet; Tom Lyne has similarly been performing weekly with his partner, as well as producing a series of bass studies on Facebook; and Dave Milligan found the time to mix and release his album Momento, recorded a few years ago in Italy. They’ve been playing together for over twenty years, though this was their first performance as a trio in a long while.

Featuring two tracks from Momento – slow, gentle and moving Going Nowhere (if ever there were a title for our times!) and an equally poignant and emphatic (There’s) Always Tomorrow – together with one new composition, We Can Go Together, and a wholly improvised piece, the trio demonstrated a high level of understanding: it felt like all the parts just fit. All three incorporate improvisation into their work, and it showed: the improvised piece flowed from one musician to another, each completely at ease.

This was a set of beautiful music: there was a simplicity to the music, with lots of space. Milligan plays in folk circles, too, and hints of this came. At other points, there were intimations of minimalism and a nod or two to Bach. All three musicians had much to say, and working together they said it with charm, elegance and delightfully.

Whilst the first set was by a long-standing band, the second came from an entirely new one – albeit featuring a rhythm section that have worked extensively together over the last few years. Stephen Henderson’s Modern Vikings has Fergus McCreadie‘s trio at its centre, with McCreadie on piano, David Bowden on bass and Henderson himself on drums. But they are a very different band, with Henderson writing all the tunes (and proving himself an able composer). They were joined by Konrad Wisniewski on tenor and Graeme Stephen on guitar. All the material was new, perhaps a benefit of the spring’s lockdown: a lively, energetic sound with an overall optimistic feel, with some more contemplative, searching moments thrown in for good measure. There was also a tinge of Scottish folk influence, too.

There were some lovely solos from all the musicians. Wisniewski’s solo on November was mournful and heartfelt, and he played a blistering, climactic solo in Oslo. Stephen’s solo on Tales of the Skald was inventive. McCreadie’s playing throughout excelled on both acoustic and electric pianos, as one might expect from his growing reputation. Henderson played with both subtlety and energy, pushing the music along without being overbearing.

They closed with a lighter, optimistic tune called Carson, Wisniewski playing soprano; each of the band contributed sparkling solos. This set marked an impressive debut for Modern Vikings, and I look forward to discovering what they do next.

Patrick Hadfield lives in Edinburgh, occasionally takes photographs, and sometimes blogs at On the Beat. Twitter: @patrickhadfield.
LINK: This stream is available until 8pm Saturday 12 December 2020.