The Johannesburg jazz scene, brimming with life, has been making a big impression for several years, but has never before been caught on disc with such energy as on Indaba Is. Let the creative producers of the album, pianist/vocalist Thandi Ntuli and singer Siyabonga Mthembu, both precursors of the young new South African jazz, take us there by the hand. 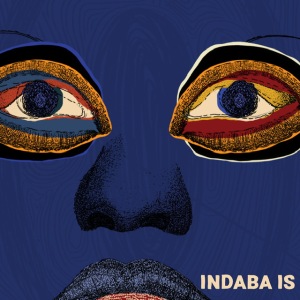 Saxophonist/clarinettist Shabaka Hutchings has had quite an influence on the contemporary jazz landscape generally. And not only as a result of albums with his revolutionary bands Sons of Kemet and The Comet Is Coming, but also because he has presented South Africa’s fresh jazz scene through his band Shabaka and the Ancestors. On the two albums he has made with them to date (Wisdom of Elders (2016) and We Are Sent Here By History (2019)), just about all of the leaders of this new scene were playing with him.

There is a broad spectrum of music on the Johannesburg jazz scene, with both (South) African origins and a sound heavily influenced by America. The current generation adds fresh elements from hip-hop and R&B but they also make their African origins just as prominent. And the words spoken have, as ever, political and social connotations.

Indaba Is, released by Gilles Peterson’s Brownswood Recordings label, and recorded over five days in August 2020, is a resounding collection of compositions showcasing the diversity of the Johannesburg jazz scene in all its glory. After last year’s strong album New Horizons, Young Stars Of The African Jazz, released via Afrosynth Records, Indaba Is is yet another introduction to the kind of bands which you immediately want to hear live to feel the optimum vibe. And each of the eight bands on this album leaves a big impression.

The album starts off well with the cool swinging Ke Nako by pianist Bokani Dyer and his band (on video below). Dyer, who started out in Cape Town but is now Johannesburg-based, is an amazing pianist who is starting to become noticed worldwide. The wonderful group of musicians he has gathered around him play just as freely and adventurously in the spaces allotted to them as Dyer responds to them in an unparalleled way. It’s a dream opener.

The Brother Moves On, the band of co-compiler Siyabonga Mthembu, continues with the dreamy yet heart-warming Umthandazo Wamagenge. Over the sounds of the Rhodes, deep bass, loose drums and guitars playing in harmony, Mthembu seizes the opportunity to shine. A composition that finds its splendid form in soul jazz with spiritual powers.

Trumpet player Lwanda Gogwana and his band spring a surprise with All Ok. A stunningly beautiful composition that moves from traditional to innovative jazz and connects traditional elements, especially in vocals and percussion, with modern classical music.

The Wretched is an impressive band. The sound with effects-laden electric guitars, powerful drums and beautiful authentic vocals in the blissfully adventurous What is History. Energetic jazz put into a decisive statement about black history. Then, Sibusile Xaba with Naftali, Fakazile Nkosi,and AshK surprise us in Umdali with traditional sounds that, around the acoustic guitar with glowing vocals, land in warm-blooded soulful atmospheres.

The Ancestors, even without the contribution of Shabaka Hutchings, are a wonderful band with a great sense of loose swing. On the extended track Prelude To Writing Together they combine their African-influenced soul-jazz sound with resplendent spiritual elements.

Equally soulful jazz sounds come from the soul and R&B-infused Dikeledi from Thandi Ntuli and her band. The warm-blooded song is a fine continuation of what she has already demonstrated so well on her unsurpassed, self-released debut The Offering. What a fascinating singer she is, what a wonderful harmony and flowing band she has. Ntuli is one of the greatest jazz talents of the last few years and fully deserves worldwide attention.

Abaphezulu by iPhupho L’ka Biko ft Siyabonga Mthembu & Kinsmen closes the album with a bang.  iPhupho L’ka Biko is the band around bassist Nhlanhla Ngqaqu and always has a selection of guest vocalists on standby, in this instance Siyabonga Mthembu and Kinsmen. Their infectious jazz sound is rooted in South African culture and contains as many traditional elements as adventurous jazz sounds.

Indaba Is is a wonderful introduction to Johannesburg’s jazz scene. A scene that is both wonderfully diverse in its musical views and with extraordinary quality and depth in its music. Indaba Is will prove to be a turning point in the discovery of new jazz.

LINKS: Indaba Is at Brownswood Recordings
(*) Dick Hovenga’s review originally appeared in Dutch on the Written in Music site.