Shez Raja – ‘Tales from the Punjab’

A sultry sun silhouetting Badshahi Mosque and the Samadhi of Ranjit Singh in the cosmopolitan city of Lahore, Punjab, signals a quite different project from Wirral-born, London-based electric bassist Shez Raja. 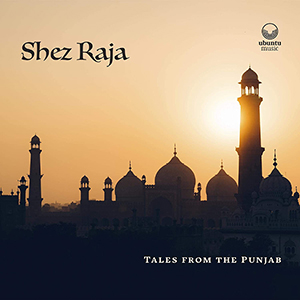 Over the past few years, Raja has won hearts and minds with his dynamic stage shows of ‘Indojazzfunk’, he and his band welcoming guest appearances by, amongst others, Dennis Rollins, Shabaka Hutchings, Soweto Kinch and guitar hero John Etheridge (Soft Machine). A sense of that energy was captured in 2014’s Soho Live and subsequent studio albums including Gurutopia (with contributions from Mike Stern and Randy Brecker). But early in 2020, travelling some 5,000 miles east of the UK, he returned to the Punjab, the South Asian homeland of his father. During visits there in his formative years, Raja would become immersed in its musical culture, learning to play the tabla. But this time, his mission was to further explore his own identity, which included the recording of material for this album with young virtuosos and veteran Indian classical musicians at the Lahore studio of guitarist and bandleader Mekaal Hasan.

The result is Tales from the Punjab, documenting the bassist’s week-long spiritual collaboration with Fiza Haider (vocals), Ahsan Papu (bansuri), Zohaib Hassan (sarangi), Kashif Ali Dani (tabla) and Qamar Abbas (cajon), in which his own compositions are explored and programmed alongside improvisatory ragas and vocalisations steeped in the exotic traditions of the province. Amidst this melting pot of creativity, the timbres of Raja’s custom-built, five-string Fodera are instantly recognisable, as is the customary fervency of his musicianship. Central to these six pieces is the establishment of his bassline grounds and riffs, from which blossom a fragrant, sometimes rock-grooving thread of democratically evolving ideas.

For example, Raja’s rising chordal slope marks out the pathway for Angel’s Tears, as Fiza Haider’s progressively soaring vocal leads to the bassist’s deft, sitar-like improvisations. From there, the traditional sounds of the Punjab begin to weave mesmerically in and out of view, sarangi and bansuri dancing to a glinting, percussive current of cajon and tabla. An evocative drone, combined with extended vocal and sarangi strains, aromatically announce Adventures in the city of wonders, Raja portraying the hustle with a hard-edged, syncopated figure to spark this genuine and vibrant east/west coalescence.

In that vein, it’s intriguing to hear how two numbers from his Gurutopia album sessions are interpreted by these musicians, in this location. Previously pop/jazz-styled Mantra is painted in humid, twilit hues, the pacier metre lending itself to fiery, improvisational exchanges; and original power-funk groove Maharaja is infused with the dusky drama of Zohaib Hussain’s breathless, echoic sarangi (a piece whose shared zeal would happily have been listened to for much longer). The beatific vocal of Maye Ni Main Kinu Akhan (a traditional melody with lyrics by poet Shah Hussain) introduces Raja’s simple yet effective rock-bass figure, whose soft-grooving semblance of early-‘70s fusion invites rhapsodic solo extemporisations. Such elevation can also be heard in closing Enlightenment, a delicate, sometimes intricate passage sustained by a subtle sarangi flow.

Describing the significance of his journey, Shez Raja explains that “from deep within the music, something else emerged – a passionate expression of the musicians’ own lives, stories, struggles and hopes”. Confirmation, indeed, that our trials and joys are universal; and throughout Tales from the Punjab – a transcendental sequence in which to ‘lose’ oneself – that vital and beautiful oneness is palpable.

Tales from the Punjab is released on Ubuntu Music on 19 March 2021.